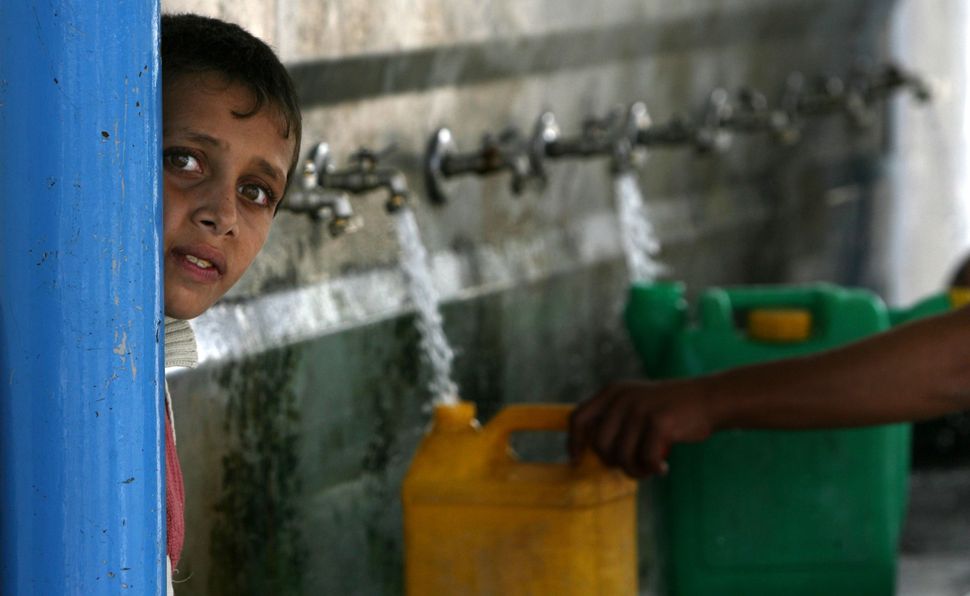 Palestinians fill bottles and containers with water at the United Nations Relief and Works Agency headquarters in the Gaza Strip. Image by Getty Images

JERUSALEM (JTA) — Most of the international employees of the United Nations refugee agency in the Gaza Strip were evacuated after what the agency called “a series of worrying security incidents.”

Nine of the 11 members of the foreign staff of the United Nations Relief and Works Agency left Gaza for Israel though the Erez crossing on Monday. The crossing had been closed for the end of the Sukkot holiday, but was opened briefly to allow the evacuation, Haaretz reported. The newspaper said that the UNRWA employees had received death threats from local employees facing the loss of their jobs due to a financial crisis in the agency.

The international employees “were harassed and prevented from carrying out their duties by individuals protesting recent measures resulting from UNRWA’s challenging financial situation,” read Monday’s statement from the agency signed by spokesman Christopher Gunness.

“This comes after weeks of protests, repeated incidents affecting international and national staff and takes place despite serious UNRWA efforts to engage authorities in an attempt to ensure proper security is afforded to its staff. UNRWA calls upon the local authorities in Gaza to respond to its repeated demands to provide effective protection to its employees and facilities,” the statement said.

The statement added that the “lack of effective security and safety risk impacting vital humanitarian services to more than 1.3 million refugees in Gaza.”

Early last month the Trump administration halted all funding to the UNRWA.

The UNRWA raised $122 million in pledges last week at an event on the sidelines of the United Nations General Assembly.