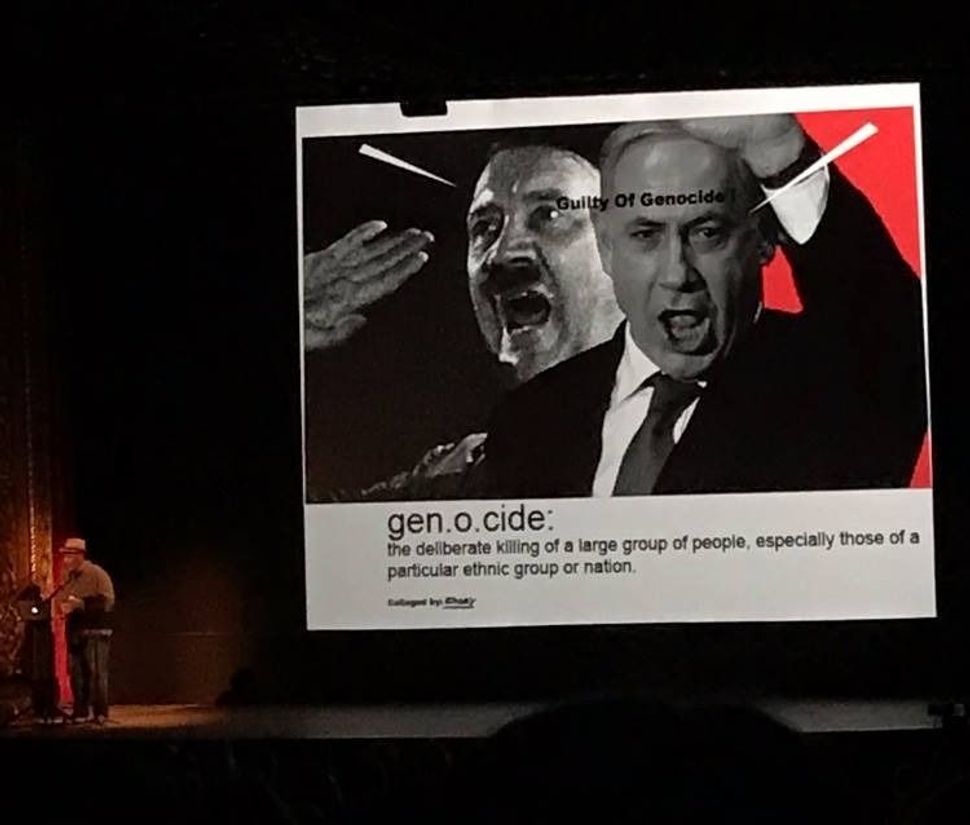 Michigan student Alexa Smith shared on her Facebook an image from the lecture, part of the Penny Stamps Speaker Series, which is part of the curriculum for art students.

During the presentation by speaker graphic artist Emory Douglas, an image was projected of both Netanyahu and Hitler giving speeches, with the words “guilty of genocide” superimposed over Netanyahu’s forehead.

“As a Jew who is proud of my people and my homeland, I sat through this lecture feeling targeted and smeared to be as evil as the man who perpetuated the Holocaust and systematically murdered six million Jews,” Smith wrote.

The lecture series also forms a one-credit course, which is required each semester for students pursuing a BA in Art & Design. A curriculum for the course acquired by the Forward states that students are required to attend (or watch online) 11 scheduled lectures, including Douglas’s, though it also says they can choose pick from a list of four other lectures to help them make up the 11 required events.

University spokesman Rick Fitzgerald noted in an email to the Forward that the introduction given as part of the series, which he called “intentionally provocative,” warns listeners that the event may be provocative or upsetting.

“The menu of speakers is diverse and dynamic and we do not control or censor what they say,” the intro says. “You may find that you discover even more about yourself and the world around you from that which you debate or those with whom you find conflict in view. Discovering what you do not agree with will help you find your voice as much or more perhaps than the things you find resonance with.”

Douglas, a graphic designer renowned for his political depictions of African-American life, is also the Black Panther Party’s former Minister of Culture and a supporter of the boycott, divestment and sanctions campaign against Israel.

Smith noted that graphic novelist Joe Sacco, who has written multiple books about the Israeli-Palestinian conflict, also spoke at the Stamps Speaker Series year. His presentation, she wrote, “made references to Israel being a terrorist state and explicitly claimed that Israeli soldiers were unworthy of being represented as actual human beings in his artwork.”

The school was also the center of controversy last month when professor there, John Cheney-Lippold, refused to sign a letter of recommendation to help a student study abroad in Israel because the professor supports BDS. The university condemned Cheney-Lippold, saying that they have “consistently opposed any boycott of Israeli institutions of higher education.”