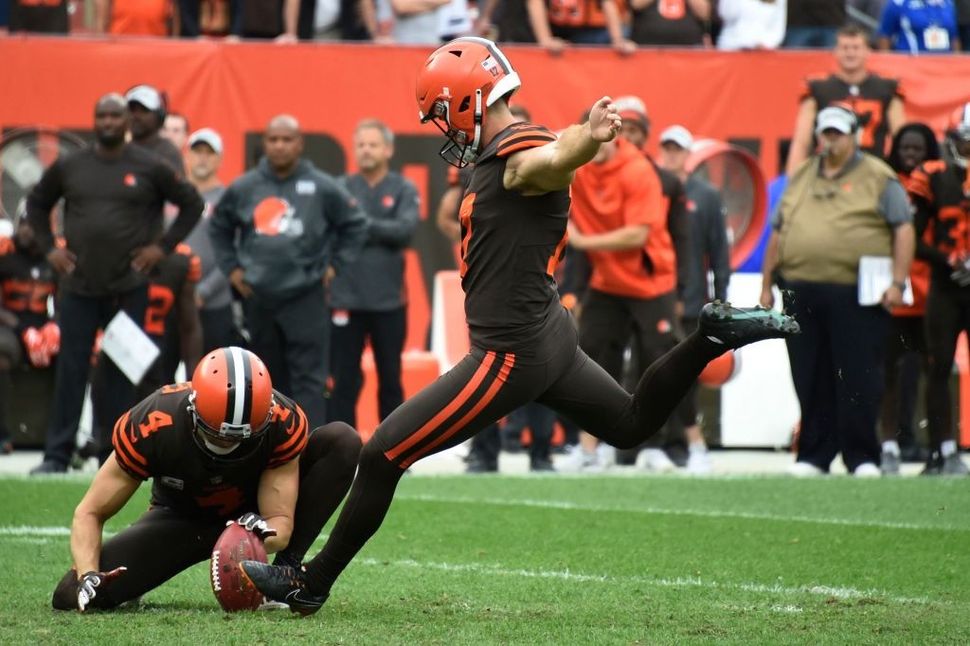 Greg Joseph of the Cleveland Browns kicks the game winning field goal in overtime against the Baltimore Ravens at FirstEnergy Stadium on October 7, 2018 in Cleveland, Ohio. The Browns won 12 to 9. Image by Jason Miller/Getty Images

(JTA) — Greg Joseph of the NFL’s Cleveland Browns got a new mezuzah and kicked a game-winning field goal — on the same day.

On Sunday, Rabbi Yossi Freedman, director of the Chabad Jewish Center of Downtown Cleveland, affixed the mezuzah on the doorpost of Joseph’s city apartment and the rookie kicker hit a 37-yarder to give the Browns a 12-9 victory over the Baltimore Ravens with 2 seconds left in overtime. It was just his third game as a pro.

“A win is a win is a … Mezuzah! Congrats to the #Browns and Greg on their win — welcome to Cleveland!” Freedman said in a Facebook post alongside a photo of a smiling Joseph admiring his new mezuzah.

It’s not clear if the mezuzah was hung before or after Joseph lined the winning kick against the Browns’ AFC North rival, which helped atone for a missed extra point at the end of the first half. Joseph also had missed a 55-year field goal attempt with 9 seconds to go in regulation play.

“I was excited once I saw it go over the bar,” Joseph said with a wry smile, Cleveland’s NBC-affiliated KYYC3 reported. “Then I made the rookie mistake of taking off my helmet. Got a little [excited]. It was just everyone jumping around, and I was just trying to see if I could pick out my family to be honest, but there is so much going on.”

Joseph, 24, who played football and soccer at the Donna Klein Jewish Academy in Boca Raton, Florida, signed with the Browns in mid-September after being cut by the Miami Dolphins, the team he had joined as an undrafted free agent out of Florida Atlantic University.