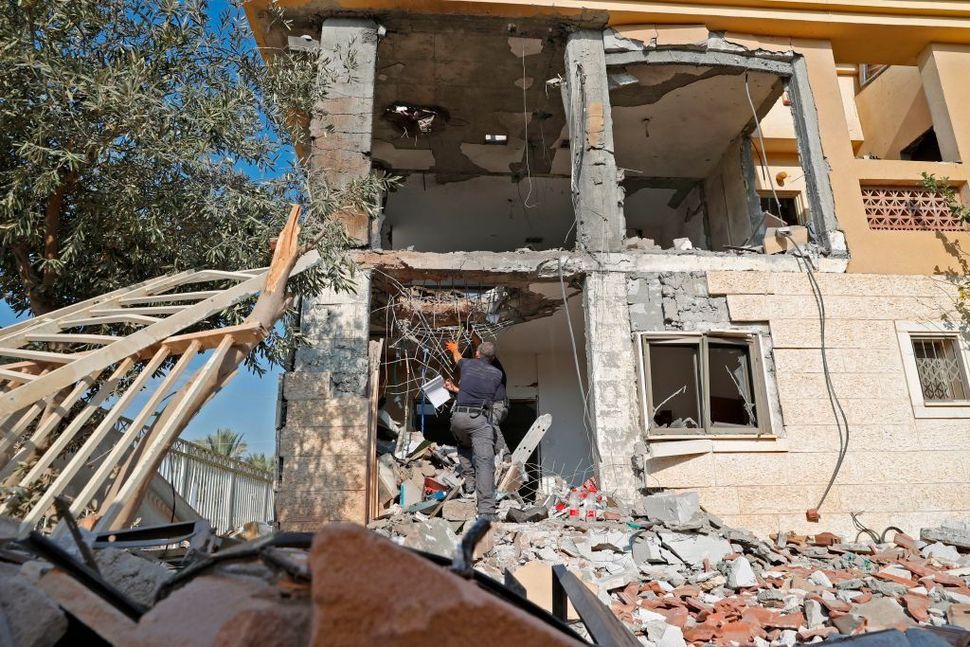 JERUSALEM (JTA) — A rocket fired from Gaza landed on a home in the southern Israeli city of Beersheba, reducing the home to rubble.

Several rockets were fired from Gaza at civilian areas of southern Israel beginning at about 3:30 a.m. on Wednesday. Israel responded Wednesday morning by bombing at least 20 military targets in Gaza, including a terror tunnel that stretched from Gaza into Israeli territory.

A young mother and her three children were in the home and had just entered their secure room when the rocket hit. There less than a minute from the time a Code Red siren sounds until impact in Beer Sheva, which is located about 30 miles from the border with Gaza. The woman and her sons were uninjured and treated for shock.

A second rocket reportedly landed just off the coast near Tel Aviv but did not cause any damage. The army does not give specifics of where such rockets land in order to not help terrorist better the aim of their rockets.

The Iron Dome missile defense system did not activate during the rocket attacks. The military is investigating why it was not triggered.

The rocket fire comes a day after Israeli Defense Minister Avigdor Liberman said during a visit to the Gaza Division headquarters near Israel’s border with Gaza that “We have exhausted all other options in Gaza…We need to strike a serious blow at Hamas. That’s the only way to bring back quiet.”

A previously scheduled Security Cabinet meeting set for Wednesday was cancelled in the wake of the rocket attacks and IDF retaliatory strikes. IDF Chief of Staff Lt.-Gen. Gadi Eisenkot cancelled scheduled meetings in the United States to return to Israel due to the rocket attacks. In addition, Liberman ordered the closure of the Kerem Shalom and Erez crossings between Israel and Gaza.

In the hours after the rocket attack on Beersheba, the IDF said it attacked more than 20 Hamas terrorist targets in the Gaza. Among the targets were a factory for manufacturing components and concrete slabs for tunnel construction, and aerial weapons production facilities in Rafah and Tel Elah, and a factory for the manufacture of weapons and rockets, the IDF said in a statement. It also destroyed a cross-border terror tunnel dug between Gaza and Israel, the second in two weeks. In addition, an Israeli military jet attacked a terrorist squad in the northern Gaza Strip during an attempt to fire rockets into Israeli territory.

The IDF said it holds Hamas responsible for the rocket fire, no matter which group actually fired the rockets.

Hamas and Palestinian Islamic Jihad on Wednesday condemned the rocket fire on Beersheba, saying it was an effort to derail Egyptian efforts to broker a long-term cease-fire between Israel and Hamas, and other armed groups in Gaza.