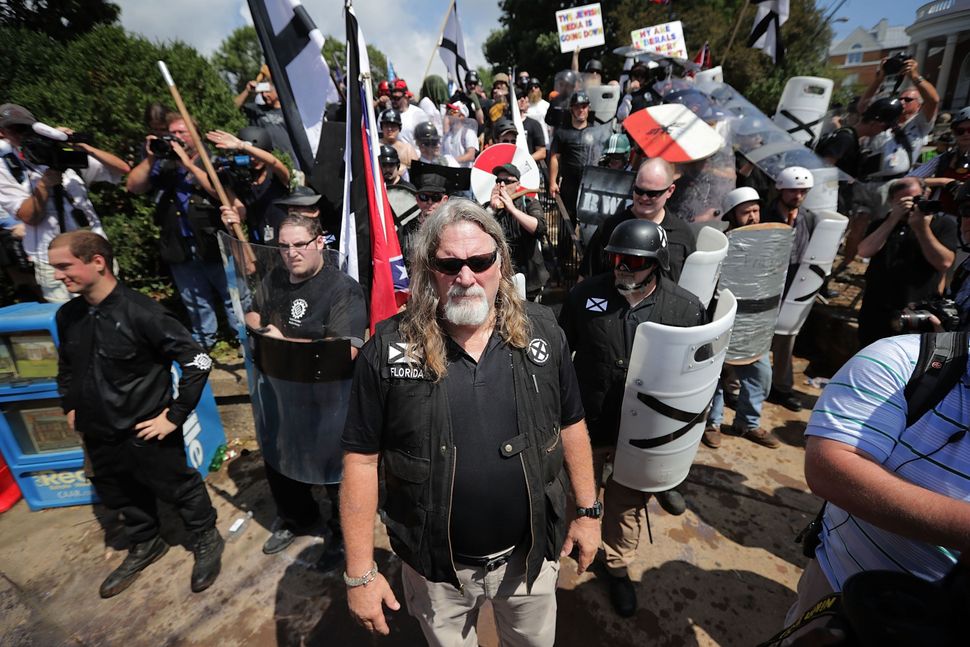 Far right groups at the “Unite the Right” rally in Charlottesville, in August 2017, which Identity Evropa helped organize. Image by Getty Images

With a booth at a conference, in a maroon sweater over a plaid shirt, a white nationalist is planning to infiltrate the Republican Party.

Patrick Casey, executive director of the white nationalist movement Identity Evropa told NBC News his goal is to “To take over the GOP as much as possible.”

Identity Evropa, which is one of several far right white nationalist groups that helped organize the “Unite the Right” rally in Charlottesville, N.C., has about 800 members, according to NBC. While the group has a stronger presence in Europe, over the past year it has ramped up its outreach on American college campuses. As part of the group’s self-styled “siege,” the group’s members have posted anti-Semitic flyers around several colleges across the country.

But like Richard Spencer, a self-appointed leader of the alt-right and perhaps its most recognizable figurehead, Casey has decided that it is easier to win over hearts and minds in a button-down rather than with deadly riots. He is trying to spread his group’s message — create white ethno-states in Europe and the United States — in a way that more traditional conservatives can understand it.

“I didn’t walk in there with, you know, an Identity Evropa flyer pasted on my forehead or anything,” Casey told NBC. “But I did have many great conversations with particularly the younger attendees, college Republican types.”

The group’s rules for membership: white, of European descent, not Jewish.

“It’s predicted that by 2045 white people are going to be a minority in this country,” Casey has said. “That is unacceptable.”