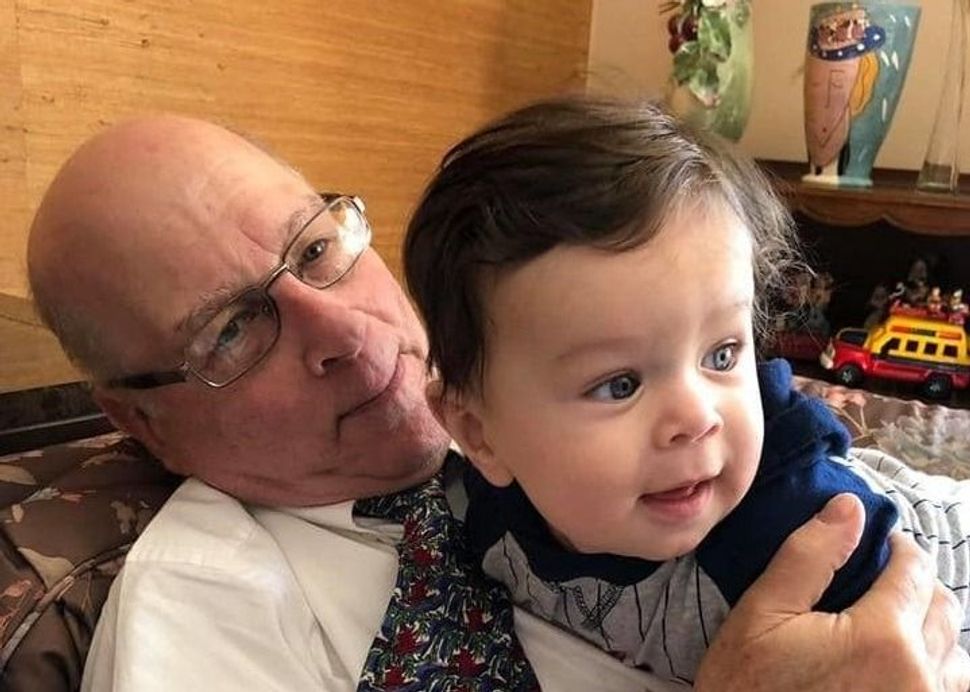 Daniel Stein, seen with his beloved grandson, was killed in the Pittsburgh synagogue shooting. Image by Family photo

After Daniel Stein was killed during the synagogue shooting in Pittsburgh on Saturday, his son Joe posted a photo on Facebook of Daniel playing with his new grandson.

“My dad was a simple man and did not require much,” Joe wrote. “In the picture below he was having a great day doing two things he loved very much. He had just finished coming from synagogue, which he loved, and then got to play with his grandson which he loved even more!”

The grandchild’s bris, or circumcision ceremony, was held earlier this year at New Light Congregation, community member Beth Kissileff told the Forward. Stein died in the kitchen, not the sanctuary.

Stein, 71, was president of New Light Men’s Club. The Washington Post reported that Stein was retired but had worked a variety of jobs, including salesman and substitute teacher.

Rabbi Seth Adelson of nearby Congregation Beth Shalom lived on the same street as Stein. They’d see each other in the neighborhood or at the gym regularly, he said. “He was very friendly…just a very nice guy,” Adelson said.

Stein’s nephew Steven Halle told BuzzFeed News that Stein was a “family man.” He noted how tragic it was that Stein’s grandson will grow up without him.

“I think that’s the worst of it,” he said. “This grandson will never get to have his grandfather. It’s a tragic loss.”

He added that Stein “loved going to the synagogue every Saturday, every week, to do events. He loved to be there. This is what he looked forward to every week. He never missed it.”

Kissileff remembered Stein as “devoted to the shul.” She noted that he still had the same Haftarah booklet from his Bar Mitzvah, and would read that selection from the prophets every year.

“There’s nothing to replace him,” she said.

Correction, February 5, 11:52 a.m.: An earlier version of this story stated that Daniel Stein died in the sanctuary, when in fact he died in the kitchen. It also stated that Stein was the president of the Tree of Life Men’s Club, but he was president of the New Light Men’s Club. The Forward deeply apologizes to the Jewish community in Pittsburgh and to Daniel Stein’s family for these errors.