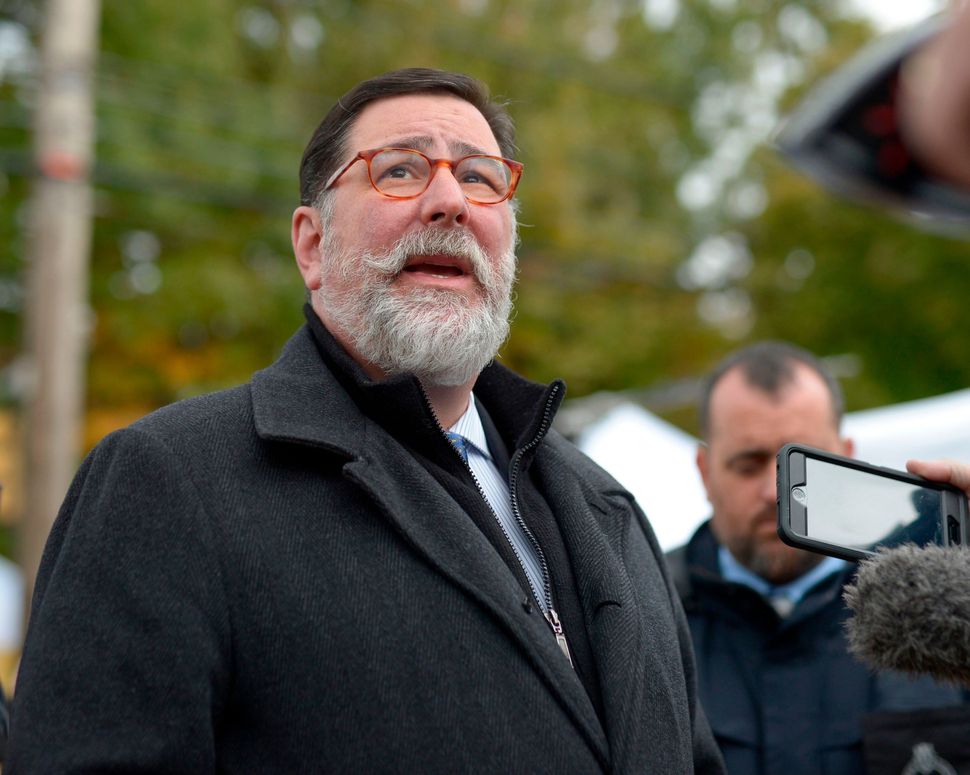 Bill Peduto, mayor of Pittsburgh, speaking to reporters on Sunday near the Tree of Life synagogue. Image by Getty

Bill Peduto, the mayor of Pittsburgh, could be easily be mistaken for a Jew in the right setting. Lately he has sported a white beard with horn-rimmed glasses; his penchant for puns and jokes is well-known.

And for Peduto, the murder of 11 congregants at the Tree of Life synagogue on Saturday was more than a trauma for his city — it was personal because, he says, he was “adopted by the Jewish community.”

“I feel a personal bond through the friendships that I have been able to build over the past couple of decades, and I feel a personal loss about what happened on Saturday,” Peduto told the Forward on Monday.

“The Jewish community is the backbone,” Peduto said of Squirrel Hill at a news conference on Sunday. “It is part of the fabric of Pittsburgh and we will be there in all communities to help our friends in the Jewish community.”

Peduto has positioned himself as a vocal member of the “resistance” against Trump. In recent days, Peduto has publicly pushed back against Trump’s stated plans to visit Pittsburgh Tuesday. Speaking to reporters Monday, he said Trump should consider “the will of the families” of the victims before deciding to come, and that he should not come “while we are burying the dead.

Peduto has spent the days since the shooting visiting with different parts of Pittsburgh’s Jewish community. On Monday afternoon, he visited an Orthodox school that is about a 15 minute walk from the Tree of Life synagogue. He met with students of different age groups, and explained to children at recess why there were now policeman stationed at their school.

“I want to teach him a lesson,” one girl said to him.

“We will,” Peduto responded.

Correction, 10/30/18, 12:00 p.m.— This article has been updated with a quote from Peduto. A previous quote mistakenly attributed to Peduto has been removed.