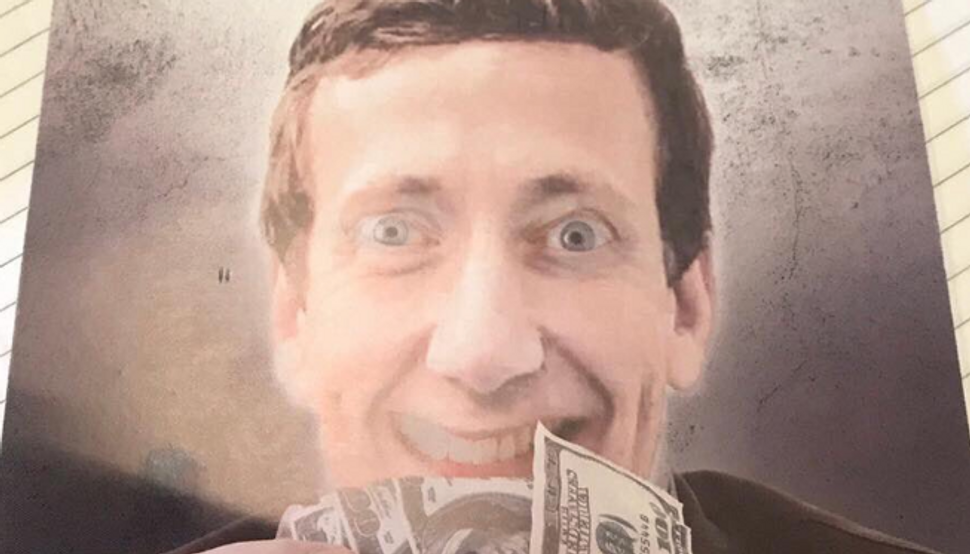 A Republican Senate candidate originally stood by the mailer he sent out that depicts his Jewish opponent eagerly clutching money, but the next day he apologized.

Ed Charamut, running for Connecticut’s 9th District seat, wrote in an email to the Forward on Tuesday that the ad was meant to say that if elected, Democrat Matthew Lesser would “hike people’s taxes,” highlighting the candidates’ different monetary goals.

“The mailer makes the point that Matt Lesser will undoubtedly vote for higher and higher government spending,” said Charamut, a member of the Rocky Hill town council. “He’s good at that, too.”

Charamut originally said that Lesser, who who gave up his seat in Connecticut’s Statehouse to run for State Senate, is using “the Democrat playbook of identity politics to hide from his record.” He insisted that the ad wasn’t meant to be hateful.

“Those wishing to portray a graphic illustration as something hateful are completely wrong. I reject hate speech in all its forms,” he said.

The mailer reads “Vote No On Matt Lesser” over an edited photo of Lesser, who is greedily holding $100 bills. It has caused outrage online for its overtly anti-Semitic theme.

The timing was just as off-color — just days ago, a gunman killed 11 people at prayer in a Pittsburgh synagogue. The massacre has been identified as a hate crime.

Charamut sent an email to the Forward on Wednesday apologizing for the mailer, insisting that the campaign committee — which he said includes members of the Jewish community — didn’t discuss any of Lesser’s personal characteristics, only his policy record.

“However, it is clear now that the imagery could be interpreted as anti-Semitic,” he wrote, “and for that we deeply apologize as hate speech of any kind does not belong in our society and especially not in our politics.”