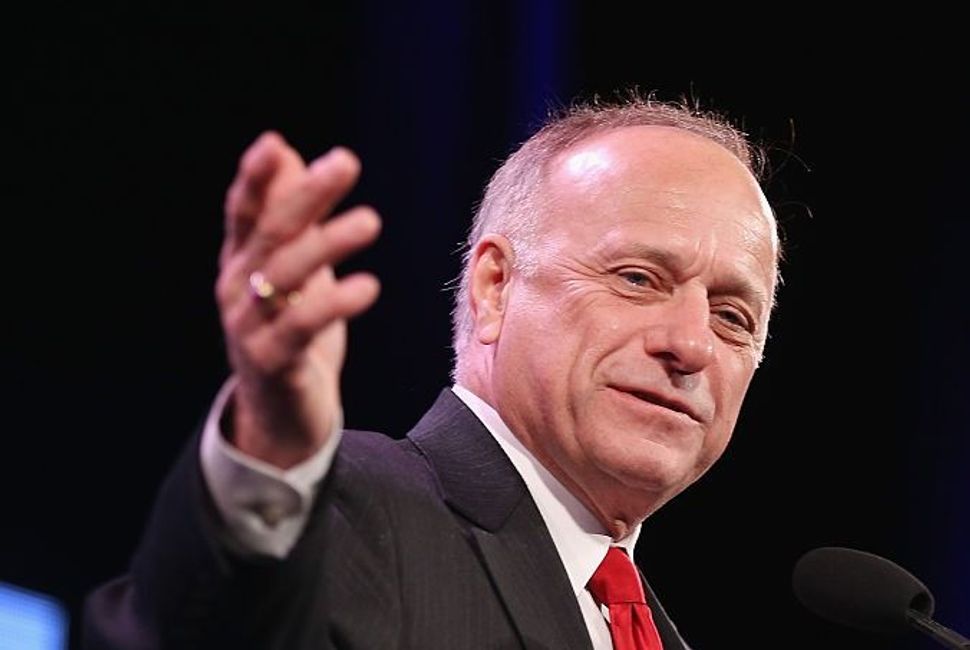 (JTA) — Two Jewish leaders in Iowa condemned Rep. Steve King for being “an enthusiastic crusader for the same types of abhorrent beliefs held by the Pittsburgh shooter.”

In a letter to the Des Moines Register published Tuesday, Alan Steckman, president of Adas Israel in Mason City, and John Pleasants, president of the Ames Jewish Congregation, said they were writing in response to the attack on the Tree of Life Congregation that left 11 worshippers dead.

“We are writing from the depths of our grief, in horror at the news of the Tree of Life synagogue massacre in Pittsburgh,” they wrote. “We feel we must speak out because our congressional representative, Steve King, is an enthusiastic crusader for the same types of abhorrent beliefs held by the Pittsburgh shooter.”

Both synagogues are located in King’s 4th Congressional District. He has been a member of the U.S. House of Representatives since 2003.

King has come under fire for recently endorsing Faith Goldy, a white nationalist who has associated with anti-Semitic and neo-Nazi websites, for mayor of Toronto. According to a report last week, King spoke in August with a far-right Austrian publication and met with members of a far-right party that has Nazi roots while on a trip sponsored by a Holocaust education group. In June, he retweeted a prominent British neo-Nazi.

King defended the meeting with members of the Freedom Party and said its leaders “completely reject any kind of Nazi ideology or philosophy.”

“We are proud Iowans who span the political spectrum, but we are united in our condemnation of white supremacy and anti-Semitism and the legislator from Iowa’s 4th congressional district who promotes it,” the Steckman-Pleasants letter said. “King’s actions and the silence of his colleagues in Iowa and in Congress foster a climate that enables the kind of hateful violence that erupted three times in the last week.”

The synagogue leaders were referring to the synagogue shooting, the bombs sent to public officials and the shooting at a Kroger in Louisville, Kentucky, that left two African-Americans dead.

On Tuesday, the head of the National Republican Congressional Committee, Steve Stivers, called out King for his recent comments, saying they were “completely inappropriate.”