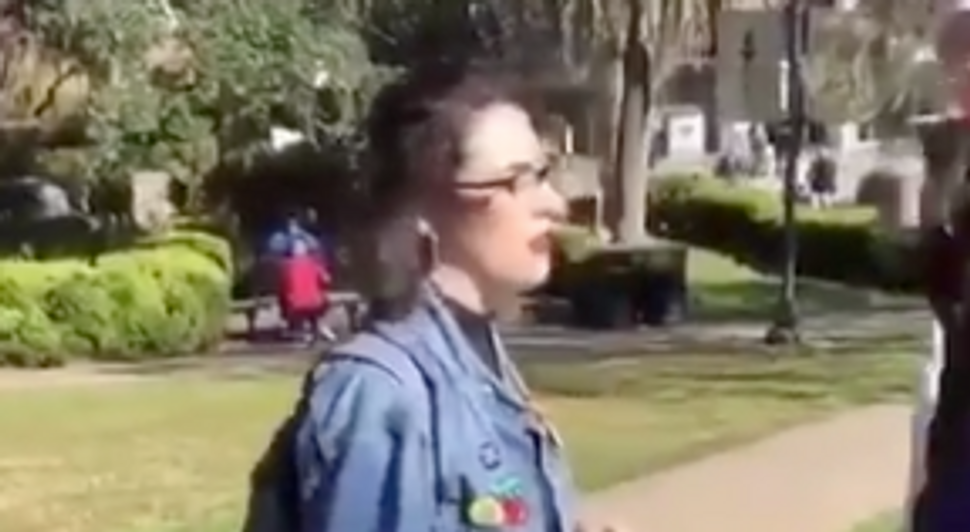 (JTA) — A Jewish woman, 19, who poured chocolate milk on a Republican campaign volunteer on the campus of Florida State University was arrested and charged with battery.

Shelby Shoup turned herself in on Thursday afternoon, hours after the incident which was caught on video and posted on Twitter by fellow FSU student Hunter Pollack, the brother of Meadow Pollack, who was killed in the Parkland High School shooting.

Shoup spent the night in jail and was released the following morning on her own recognizance. She will appear in court for a hearing on Nov. 28, according to reports.

“I hope y’all realize that you are normalizing and enabling Nazis,” Shoup, who identified herself as a volunteer for the with Democratic gubernatorial candidate Andrew Gillum’s campaign, shouted at the volunteers.

“Eleven of my people are f—-ing dead this weekend,” she said, referring to the Pittsburgh synagogue shooting. “Nazis are shooting my people,” she also said.

FSU responded to the incident in a statement: “FSU is a diverse community that values and respects each person. FSU expects each member of the community to embrace the values of civility and ethical conduct and obey the law. Regarding Tuesday’s incident, the individual was identified, arrested and charged with battery.”

Pollack in the tweet in which he posted the video of the incident called it a “vile attack.” He identified himself as a member of the campus Republican organization.

Sickening to see a member of @FSUGOP a group I’m proud to be in have chocolate milk thrown on her for campaigning . In the state constitution it says students are allowed to express their point of view on campus. This is a vile attack. pic.twitter.com/Wd9RQSqCrt