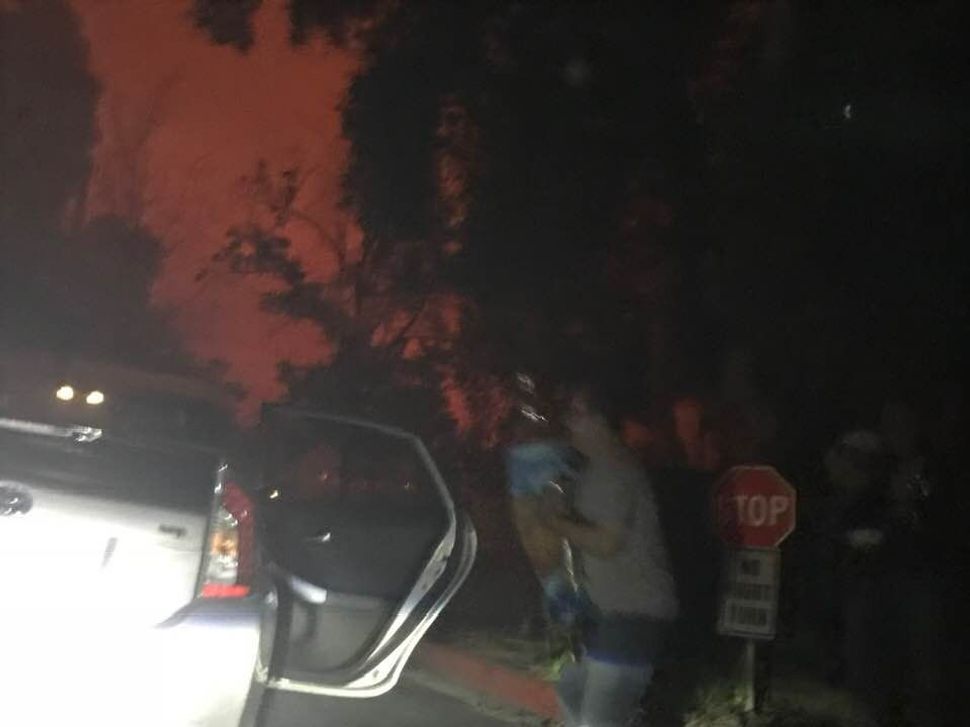 A Southern California rabbi clutches a Torah scroll as fires rage behind him. Image by facebook

Despite fires raging in the distance, a Southern California rabbi ran into his synagogue to rescue its Torahs.

Temple Adat Elohim, a Reform synagogue in Thousand Oaks, sits in the path of two fires, Hill and Woolsey. Rabbi Barry Diamond and President Sandy Greenstein made it to the synagogue before mandatory evacuations to save the four Torah scrolls, according to a Facebook post Friday.

Temple Adat Elohim is in the same neighborhood as the bar where 12 people were killed in a mass shooting on Wednesday. The next day, the synagogue shared a message of heartbreak and peace while urging members to donate blood.

On Thursday, Rabbi Diamond and other local clergy offered messages of unity and hope at a nearby theater.

Most of the town of Thousand Oaks was ordered evacuated, adding to the anguish days the shooting rampage.

President Trump, weighing in on the emergency during a trip to France, said early on Saturday that “gross mismanagement of forests” was to blame.

“There is no reason for these massive, deadly and costly forest fires in California except that forest management is so poor,” he wrote in a Twitter post.

Trump has previously blamed California officials for fires and threatened to withhold funding, saying the state should do more to remove rotten trees and other debris that fuel blazes.

State officials have blamed climate change and say many of the burn areas have been in federally-managed lands.

“Our focus is on the Californians impacted by these fires and the first responders and firefighters working around the clock to save lives and property – not on the President’s inane and uninformed tweets,” Evan Westrub, a spokesman for California Governor Jerry Brown said in an email.-With Reuters