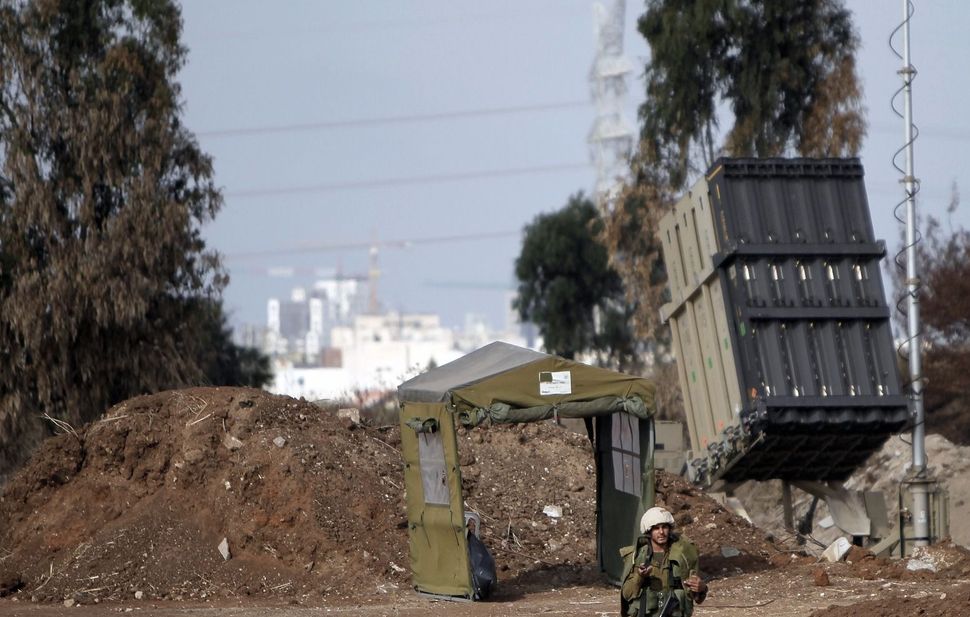 JERUSALEM (JTA) — One person was killed and two seriously injured after a rocket fired from Gaza landed on an apartment building, as southern Israel remained under rocket siege for a second day.

The rocket hit the upper floors of a four-story apartment in Ashkelon shortly before midnight on Monday night. The body and one of the injured women were discovered early on Tuesday morning under the debris of a fallen wall.

As of Tuesday afternoon, more than 400 rockets fired from Gaza had struck southern Israel. At least 100 were intercepted by the Iron Dome missile defense system, according to the Israel Defense Forces.  The IDF has responded by hitting some 150 targets associated with the terror organizations Hamas and Palestinian Islamic Jihad, as well as four government buildings used by Hamas for military purposes the IDF said in a statement.

After a lull in rocket fire between about 1 a.m. and 6 a.m., rocket fire picked up again on Tuesday morning. Residents of Gaza-border communities were ordered to remain in their bomb shelters and protected rooms. Residents of the cities of Beersheba, Ashkelon and Ashdod were told to stay close to their bomb shelters and protected rooms.

On Tuesday morning an Israeli official told local media that the government has suspended cease-fire talks being mediated by Egypt and the United Nations.

Six rockets have directly hit homes and buildings in Ashkelon leaving 74 people injured, the national broadcaster Kan reported. A rocket on Tuesday morning landed in the play yard of a nursery in a kibbutz in the Sha’ar Hanegev Regional Council, but no children were there at the time.

The dead man was identified on Tuesday afternoon as Mahmoud Abu Asbah, 48, a Palestinian from West Bank town of Halhul, north of Hebron. He reportedly had a work permit enabling him to be in Israel.

Israel’s Security Cabinet began a meeting late on Tuesday morning which was expected to last several hours. As of early Tuesday afternoon, the IDF had not yet begun to call up a significant number of reservists.