On top of the hill, above the barren soil charred by wildfire, Camp Hess Kramer’s menorah remained standing.

The Jewish summer camp in the Malibu hills posted a haunting photo Sunday on its Facebook page that detailed just a portion of the damage created by the Woolsey fire, one of three that has raged through California. Although the camp and its sister camp, Camp Hilltop, are almost completely destroyed, the photo’s message is clear: In the face of destruction and heartbreak, there’s still hope.

“Saturday night’s Havdallah gathering poignantly reminded us that camp is really about the people and what we do together,” Camp Hess Kramer wrote in the photo’s caption, mentioning the service it live-streamed the night before. “The location will be a different and temporary one, but we will be together this summer. There will be camp. Then, we will rebuild. Hess Kramer and Hilltop will endure.”

Here is what the area looked like before the fire: 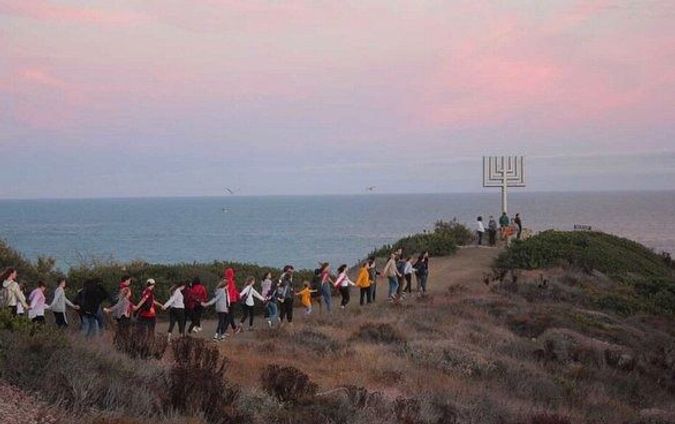 The post goes on to describe the important role fire has played in Jewish history.

“As Rabbi Eshel said in his Havdallah remarks, ‘We remember God spoke to Moses through the burning bush to inspire our people to freedom. God led us through the wilderness with a pillar of fire. This flame will not destroy…rather this flame will light our way to a bright, bright future.’”

Out of Camp Hess Kramer’s 28 cabins, only one survived the fire, the Los Angeles Times reported. The dining hall and the building where the infirmary and offices are found are the only structures standing — except for the wooden menorah.