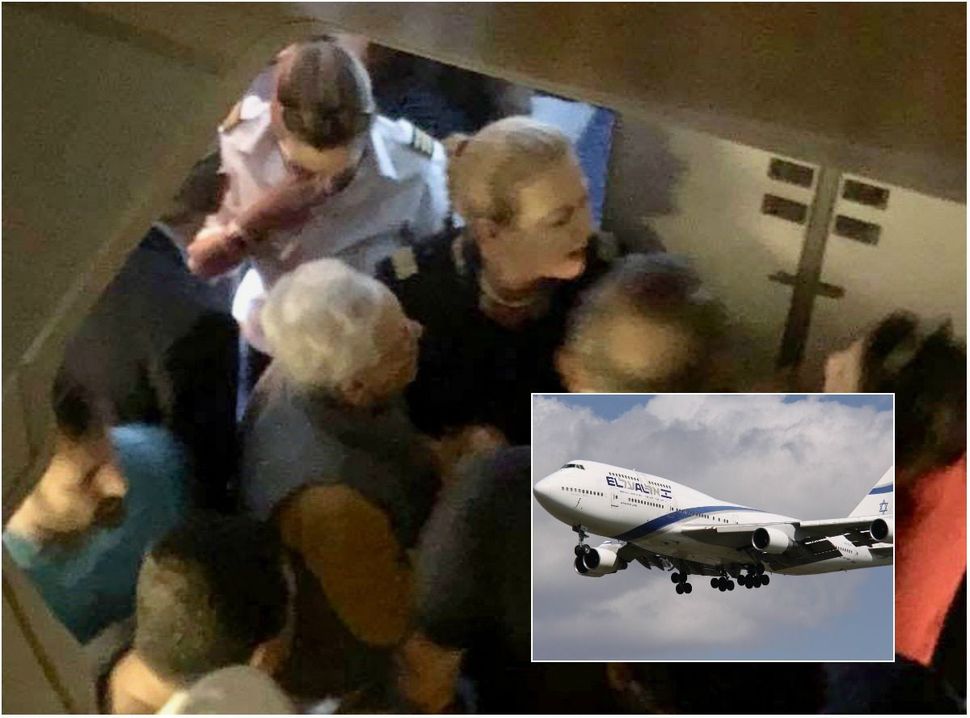 A woman on board one flight captured a video of the commotion from the second floor of the airplane. Image by Courtesy of Roni Meital/Wikimedia

Ultra-Orthodox passengers forced an El Al flight from the U.S. to Israel to land in Greece Friday afternoon over concerns that they would still be in the air as the Jewish Sabbath began, the Daily Mail reported. One flight was diverted to Rome, while the other had to land in Athens.

Both planes had been scheduled to leave Thursday, but were delayed for five or more hours because of a snowstorm that blanketed New York City with more than six inches of snow. Ultra-Orthodox passengers reportedly caused chaos on board after it became clear they would not get to Israel before Shabbat began. Observant Jews do not use transportation or electricity on Shabbat.

“I blocked violent passengers trying to push themselves to the second floor, I hugged stewardesses that were crying, blocked someone who ran up the stairs threatening to beak into the cockpit, was told woman go back to where your [sic] from when trying to film them… and unfortunately from what I saw was mostly kippa wearing men,” Roni Meital, who was on board the flight grounded in Athens, wrote in a Facebook message to the Forward.

A video of the incident shows Israeli passengers and flight crew yelling at each other. One flight attendant is asking the passengers to go back to their seats, while a man yells, “Enough, enough, enough! Go sit!”

Religious passengers on the flights challenged reports that there was violence against the crew. They also said that the crew had lied and told them they would be on the ground in Israel with enough time to get home to observe the Sabbath.

El Al told one Israeli news outlet it would be filing a complaint against one unnamed passenger, who the airline said was violent.

“I did not see any violence on the flight after the captain announced the change of destination, although clearly I wasn’t watching every part of the plane all the time. If there was, then that is inexcusable,” Betsalel Steinhart, a Jerusalem-based tour guide, wrote for the Times of Israel. (Disclosure: This reporter was a student of Steinhart’s on an Israel program in 2010.)

Steinhart said that ultra-Orthodox passengers tried to deplane in New York, but stayed on the flight after being reassured that the flight would land in time for Shabbat.

“The captain blatantly lied to us,” he wrote from Athens. “I will eventually get home and I will proudly tell my kids that I chose to go to Athens and miss them, rather than break Shabbat.”