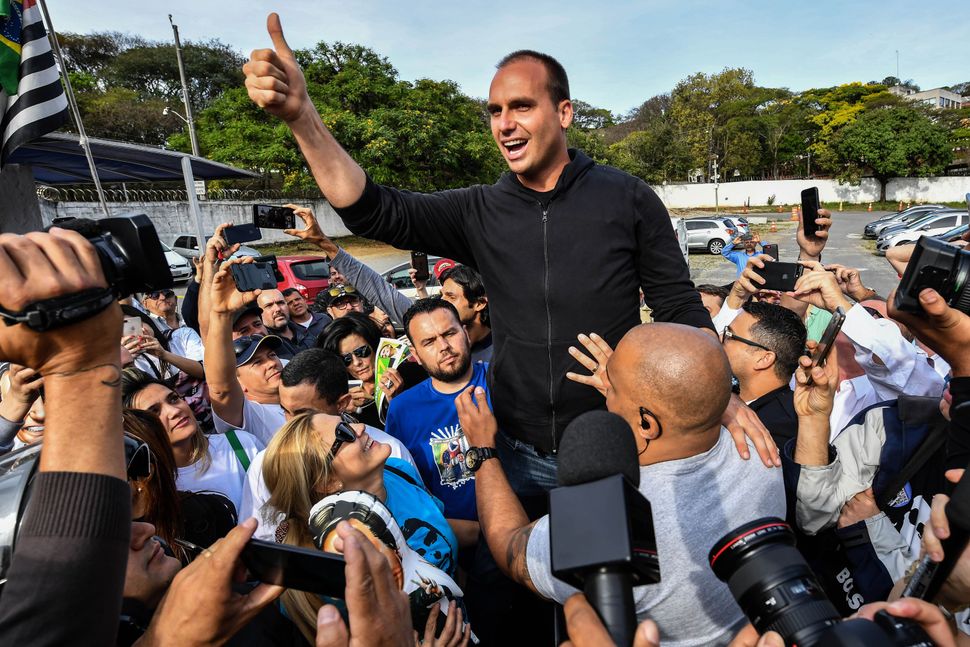 RIO DE JANEIRO (JTA) — The son of Brazil’s president-elect has confirmed to the U.S. president’s Jewish son-in-law that his country’s embassy will move to Jerusalem.

“The question should not be whether we will do it, but when we will do it,” Brazilian congressman Eduardo Bolsonaro told Jared Kushner during a meeting in Washington on Tuesday.

Jair Bolsonaro’s 34-year-old son was re-elected in October to a second term and became the Brazilian federal lawmaker to garner the most votes in history with over 1.8 million votes.

“We don’t know the date for the relocation or when it will happen, but we have an intention to do so,” he told Brazilian media when leaving the meeting, wearing a hat bearing the message “Trump 2020.”

Eduardo Bolsonaro also wrote on Twitter that Kushner is one of the White House’s most important advisers and a great entrepreneur, besides being a member of the Trump family.

After being elected, Jair Bolsonaro announced that he intended to uphold his campaign promise and move the Brazilian embassy to Jerusalem.

“Israel is a sovereign state and we shall duly respect that. Like all other countries, they have the right to choose their capital city,” he wrote.

Brazil’s new right-wing president is a passionate admirer of Israel. Dubbed “Brazil’s Trump,” his candidacy divided Jewish voters. Bolsonaro is referred to by opponents as “extreme” and “a risk” to democracy. The former army captain waxes nostalgic about Brazil’s 1964-1985 military regime, and has derided gays, women and minorities. Some have gone so far as to liken him to Adolf Hitler and the Nazi Party.