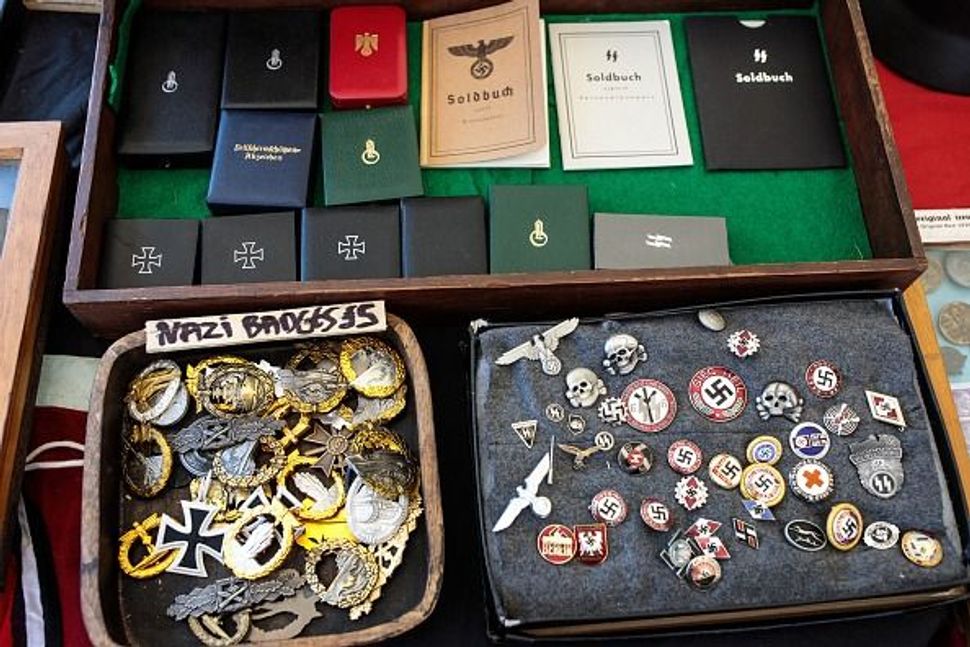 The market for Nazi paraphernalia is growing, and Jews make up a surprisingly large portion of buyers, The Washington Post reported.

There’s an increase in inventory — as the soldiers grow older, nearing death, their families begin selling the relics of their service. Some Jewish groups insist some of Adolf Hitler’s personal items and other WWII memorabilia are worth saving.

Haim Gertner, the archives director of Yad Vashem, the prominent Holocaust memorial in Israel, told The Post that the artifacts and documents should be saved if the owners see it as never forgetting the anti-Semitic history weaved within them. Rabbi Marvin Hier, the founder of the Simon Wiesenthal Center in Los Angeles, has a similar mindset, arguing that certain objects, like Hitler’s swastika ring made with 16 rubies (which sold for more than $65,000), only entice hatred and give rise to anti-Semitism.

Basil “Bill” Panagopulos, founder of Alexander Historical Auctions in Maryland, a buyer and seller of Hitler’s belongings and other Nazi paraphernalia, said the market has spiked with the help of World War II movies, documentaries and the History Channel. And, he noted, many of the buyers of the expensive tchotchkes are Jewish.

One buyer is Michael Bulmash, a retired Jewish clinical psychologist from Delaware. He has been buying memorabilia for the last two decades, donating everything to the Bulmash Family Holocaust Collection at Kenyon College in Ohio. His finds include an old issue of Nazi member Julius Streicher’s newspaper, Der Stürmer.

“It’s all about getting this stuff out in people’s faces,” Bulmash told The Post, “especially when you had neo-Nazis marching in Charlottesville and the president of the United States creating a false equivalence between what neo-Nazis were doing and what the people who were trying to stop them were doing.”

Another, Howard Cohen, a retired Jewish optometrist in Pittsburgh, holds various Nazi Germany “anti-Semitica” at home. Yet the items — which includes a Der Stürmer ashtray embellished with caricature of a hook-nosed Jew he got for about $2,000 — remain hidden from guests.

He said his wife and children don’t necessarily understand or approve of his purchases.