Ronald McDonald On The Cross Artwork Denounced By Israeli Christians 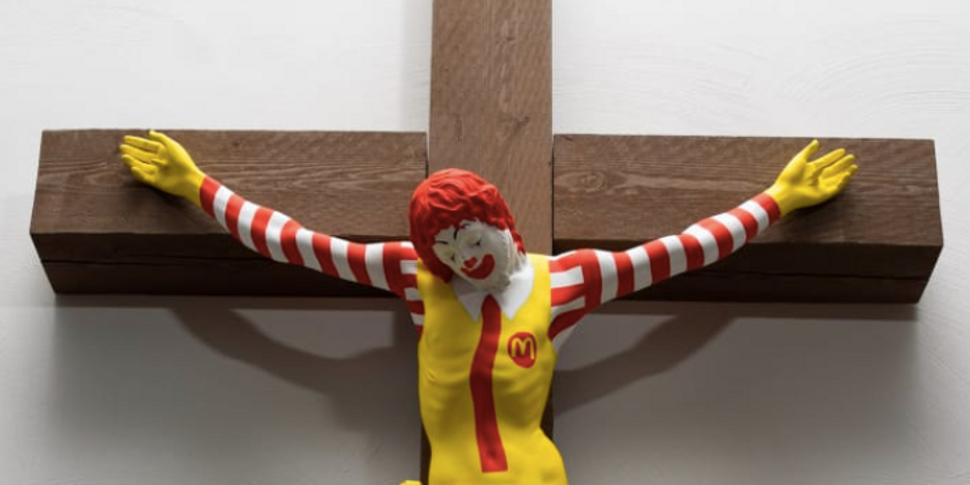 The pastor of Haifa’s Saint Elijah Cathedral condemned over the weekend an exhibition at the Haifa Museum of Art that includes a sculpture of a crucified Ronald McDonald.

“We denounce the exhibition and the injury to the holiest symbol of Christianity by an institution that is supposed to serve citizens of all religions,” the Rev. Archimandrite Agapious Abu Sa’ada of the Greek Melkite Catholic Archeparchy of Acre told Haaretz.

The sculpture was created by Finnish artist Jani Leinon and has been on display in Haifa for months as part of an exhibition called “Sacred Goods.”

Hundreds of Christians protesters gathered in front of the museum on Friday, demanding the artwork be removed. Three police officers were injured by stones thrown at them by demonstrators and a 32-year-old man was arrested.

In a statement, the church said it respects free speech and recognized that the exhibition is meant to criticize a capitalist society that worships money and consumer goods. It said that the church supports critique, but not through the defacement of the holiest symbol in Christianity.

According to Abu Sa’ada, he and several other priests met with the management of the museum and agreed that a screen would be placed around the work, blocking it from general view, and a sign would warn visitors of potentially offensive content.

“We as religious people are meant to steer away from violence. Therefore whoever thinks he can defend Christian values with violence is gravely mistaken.”

Ronald McDonald On The Cross Artwork Denounced By Israeli Christians