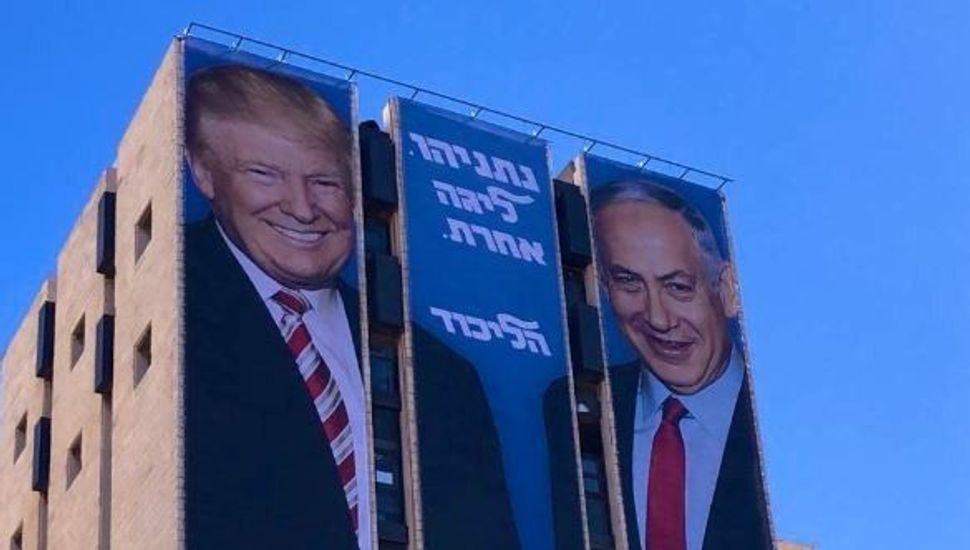 Israeli prime minister Benjamin Netanyahu has slapped a massive picture of himself shaking hands with President Trump on the side of a building in Tel Aviv.

“Netanyahu. In Another League,” reads the poster, a campaign ad for Netanyahu’s Likud party.

Versions of the image, in smaller format, have popped up elsewhere in Tel Aviv and Jerusalem, according to AFP.

Netanyahu has trumpeted his alliance with Trump, who has backed a number of longstanding Israeli objectives, including international recognition of Jerusalem as Israel’s capital.

In addition to boasting of his friendship with the American president, Netanyahu is aping his campaign. This week, Likud announced it would produce a TV program, similar to the video talk show produced by the Trump campaign.

In an interview with the Jerusalem Post, Conference of Presidents of Major American Jewish Organizations chief Malcolm Hoenlein said it was unclear how the majority of American Jews who oppose Trump would react to the ads. “When Netanyahu comes to America ahead of the election, of course he has to meet with the president,” Hoenlein said. “You just have to be smart on how to go around it.”