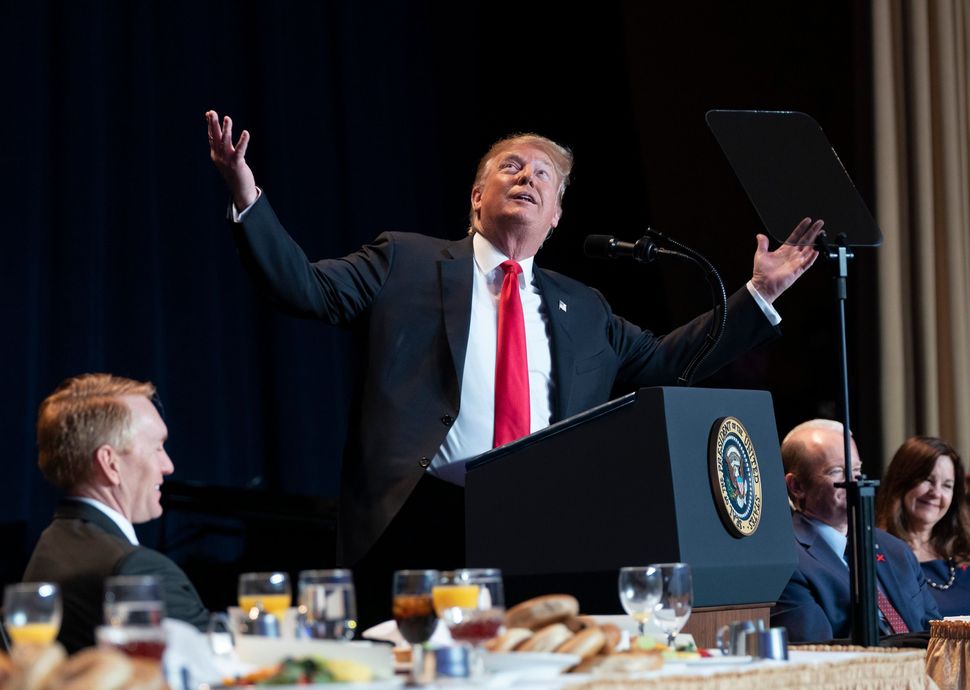 In comments at the National Prayer Breakfast on Thursday morning, President Trump nodded to his religiously conservative audience, promising he would “never let [them] down,” while signaling his support for proposed anti-abortion restrictions.

“All children are made in the holy image of God. Every life is sacred and every soul is a precious gift from heaven,” Trump said, echoing rhetoric from his State of the Union address, delivered on Tuesday.

The annual prayer breakfast is organized by the Fellowship, an evangelical organization that cultivates ties to political leaders in the U.S. and abroad. U.S. presidents have used the event for decades as a venue to speak directly to evangelical voters. In 2017, Trump used the platform to promise to end restrictions on political endorsements by churches; a promise he has as yet been unable to keep.

In his speech on Thursday, President Trump alluded to his new anti-abortion push, though stopped short of discussing the policy proposals he had laid out in the State of the Union. “Every life is sacred, and every soul is a precious gift from Heaven,” Trump said at the breakfast. “As the Lord says in Jeremiah, ‘Before I formed you in the womb, I knew you… Before you were born, I set you apart.’”

Two days earlier, during his annual State of the Union address, Trump called for a ban on so-called “late-term abortion,” and attacked new legislation in New York State that codifies abortion protections. “Lawmakers in New York cheered with delight upon the passage of legislation that would allow a baby to be ripped from the mother’s womb moments from birth,” Trump alleged.

In fact, the new New York law only allows abortions after 24 weeks when a fetus is no longer viable, or when an abortion is necessary to protect the life of the mother.

While the renewed push for abortion restrictions was cheered by Republicans at the State of the Union, and by the audience at the Prayer Breakfast, it was likely less popular among Jewish listeners. According to a 2014 poll by the Pew Research Center, 83% of American Jews believe that abortion should be legal in all or most cases. That’s higher than among any other religious denomination polled by Pew.

Some Jews do support stricter abortion laws. In a statement in late January, the ultra-Orthodox umbrella group Agudath Israel of America condemned the New York legislation that Trump criticized in his State of the Union, calling it “even more life-unfriendly legislation.” And the Coalition for Jewish Values, a conservative Orthodox advocacy group, said in a statement that it was “indefensible.”

Trump’s speech at the Prayer Breakfast included other nods to religious conservatives, including his praise for Vice President Mike Pence’s wife’s work teaching at what Trump referred to as a “Christian school.” Karen Pence has received heavy public criticism for working at the school, according to NBC News, as the school bans gay and transgender employees and students.

At another point in the speech, Trump flubbed a line, accidentally praising faith leaders for the “abolition of civil rights.” The misstatement was widely ridiculed on social media, according to USA Today.