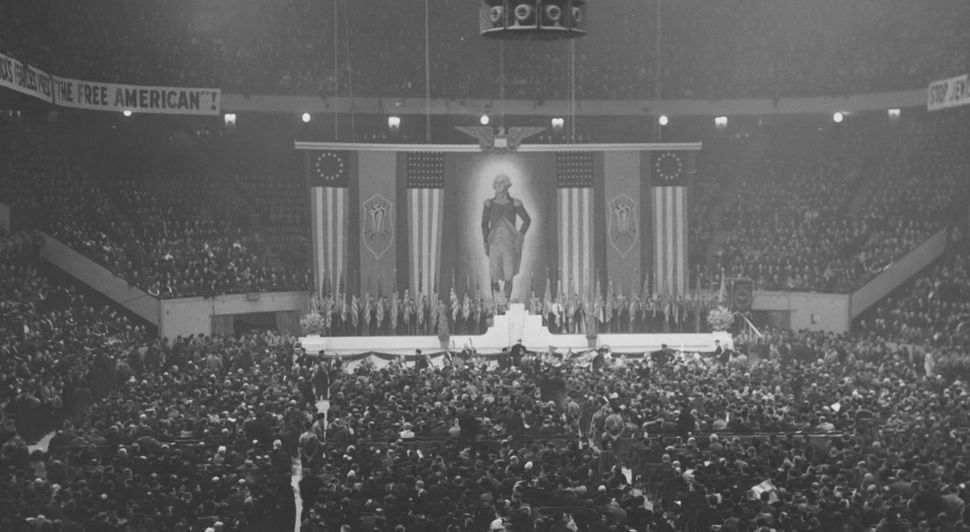 An image of a meeting of the German American Bund, a pro-Nazi organization in the U.S., in 1939, which 20,000 people attended. One of the banners reads, “Stop Jewish Domination Of Christian Americans.” Image by Getty

Fox News will not air an ad for an Oscar-nominated documentary about American Nazism, the Hollywood Reporter reported.

The 30-second ad, called “It Can Happen Here,” is for “A Night At The Garden,” a documentary short about a 1939 meeting of [the German American Bund, a pro-Nazi organization. That infamous meeting, which gathered 20,000 people in New York’s Madison Square Garden, was a dramatic show of American support for Hitler — and of American anti-Semitism. Banners hung up in the Garden read “Stop Jewish Domination of Christian Americans,” and “Wake Up America. Smash Jewish Communism.” The crowd yelled “Seig Heil!”

“A Night At The Garden” is pieced together from archival footage of the event, recalls the shocking level of determination and organization achieved by American Nazis and their supporters.

But Fox News rejected the ad for the short, which is meant to warn that Nazism and fascism can happen in American. The ad, which Fox News’ leadership deemed “not appropriate,” was meant to be aired for the Sean Hannity’s show, historically the most-watched cable news broadcast.

“It’s amazing to me that the CEO of Fox News would personally inject herself into a small ad buy just to make sure that Hannity viewers weren’t exposed to this chapter of American history,” said Marshall Curry, the director of the short.