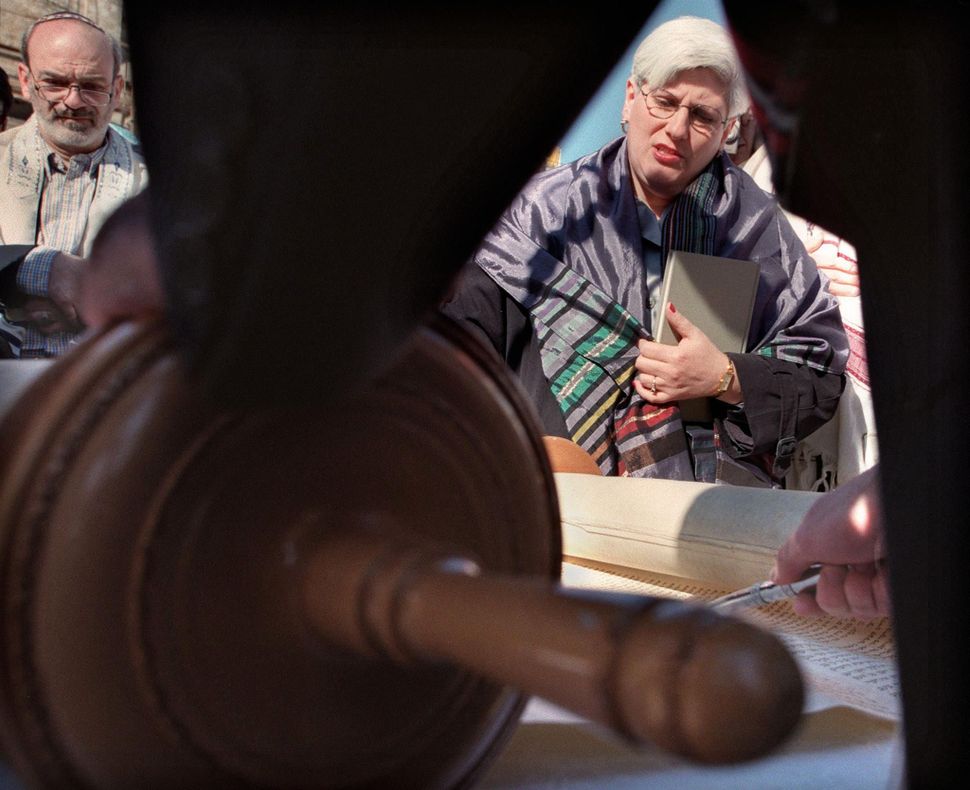 A Reform rabbi prays at the Western Wall in Jerusalem. Image by Getty Images

A banner attacking Reform Jews, hung near a shopping mall in the Israeli city of Ramat Gan, is sparking fear in Israel and legal threats from a liberal Jewish group in the U.S.

The banner, hung on Wednesday, reads, “A Reform grandfather = an assimilated father = a goy grandson,” according to a report in the Jerusalem Post. The text suggests that Reform Judaism leads to assimilation, and was hung by a Israeli national-religious group calling itself Hazon.

There’s an American Jewish environmental group with that same name. On Thursday, that Hazon sent an email to its supporters, saying it had delivered a cease and desist letter to the Israeli organization. Hazon is the Hebrew word for vision.

Reform leaders warned that the banner could lead to violence against progressive Jews in Israel. In a statement, the president for the Israeli branch of the Reform movement, the Israel Movement for Reform & Progressive Judaism, called the banner part of an “incitement campaign” against Reform Judaism.

“We are not discounting the possibility that the unceasing verbal incitement against us will lead to actual violence against our members and synagogues as has happened in the past, and we therefore call on the Orthodox establishment and leaders of the Haredi political parties to publicly distance themselves from this campaign of hatred,” said Rabbi Gilad Kariv, the group’s president.

“I wanted to let you know that our lawyers have now served a cease-and-desist letter on this new ‘hazon,’” wrote Nigel Savage, the American Hazon’s executive director. “We have spent twenty years associating the word ‘hazon’ with so much that is good and right in Jewish tradition; and we indeed registered the name Hazon as a trademark, nearly a decade ago. We don’t want anyone to think that they can randomly fan flames of hatred in our name.”

(The American Hazon uses office space leased from the Forward Association, which publishes the Forward.)

The Israeli Hazon has called in recent weeks for protests against women praying at the Western Wall, and posted an anti-gay banner in Jerusalem reading, “A father and a mother = a family. The courage to be normal,” according to the Jerusalem Post.

The organization has also sponsored Facebook at text message ads, according to the Jerusalem Post. It says it aims to return “the Jewish character to the national agenda in Israel.”