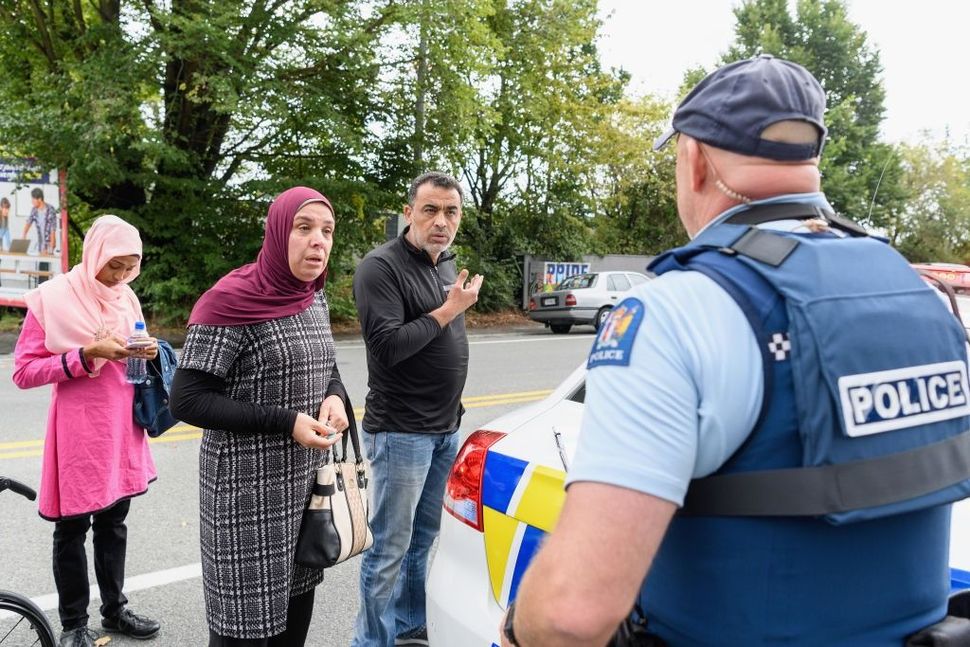 Members of the public react in front of the Masjd Al Noor Mosque as they fear for their relatives on March 15, 2019 in Christchurch, New Zealand. 49 people have been confirmed dead and more than 20 are injured following attacks at two mosques in Christchurch. Image by Kai Schwoerer/Getty Images

(JTA) — Jewish groups from New Zealand and beyond expressed their horror at the slaying of at least 49 people at two mosques in Christchurch Friday.

The New Zealand Jewish Council is ”sickened and devastated” by the attacks, in which at least one armed individual killed dozens of people by shooting them at close distance with a semi-automatic rifle. Footage of the carnage, which the killer filmed and streamed live, shows victims huddling and moaning as the killer fires into the crowd.

“We offer our full assistance and support to the Muslim community and stand united with it against the scourge of terrorism and racism, which we must do all we can to banish from New Zealand,” Stephen Goodman, the president of The New Zealand Jewish Council told the Jewish Telegraphic Agency.

World Jewish Congress President Ronald S. Lauder expressed “horror and revulsion” at the attacks. “I extend my deepest condolences to the family and loved ones of the victims, and to the people of New Zealand. We must redouble efforts to combat hatred and division in our societies, from wherever it emanates,” he wrote in a statement.

A man in his late twenties was charged with murder in connection with the shootings.

Two other men and one woman are in custody.

Police also found multiple explosive devices in a car belonging to one of the suspects, the BBC reported.

The attack, which came around the time people were attending the mosques for Friday prayers, was the deadliest in the nation’s history.