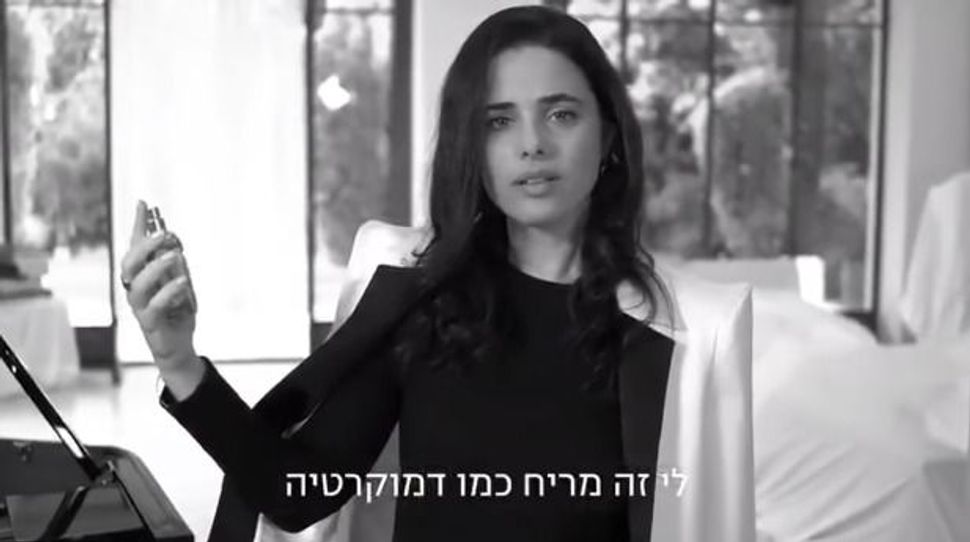 Ayelet Shaked in the ad from The New Right. Image by Screenshot

A new Israeli political ad from the conservative party The New Right has garnered laughs, scorn and confusion in both Israel and the U.S.

The satirical ad features Israeli Justice Minister Ayeley Shaked as the face of a perfume, “Fascism.” It features Shaked posing in slow motion, showing off the fragrance bottle, as taglines float across the screen: “Judicial reform,” “Separation of powers” and “Restraining the Supreme Court,” according to translations from Haaretz.

The ad closes with Shaked saying to the camera, “To me, it smells like democracy.”

The ad is apparently meant as a jab at leftist parties that accuse Shaked’s agenda of having fascist overtones. She has sought to limit the power of the judiciary branch, in part by calling for the removal of a panel that appoints judges, and giving that power to Israeli lawmakers. The ad suggests that what leftists call fascism, she calls democracy.

The ad, released two days before Purim, is the latest in a string of strange ads being pushed out ahead of Israeli elections on April 9.

It was met with no small amount of confusion from American observers, who noted that, to American audiences, the ad looks for all the world like Shaked is genuinely trying to sell “Fascism.” Or, as The New York Times had it, that Shaked was “indeed happy to bathe herself in eau d’autocrat.”

1) Apparently this is not a joke.

3) if it weren’t already clear, irony is dead. https://t.co/a3TqCU1KzD

For those wondering what this troll ad means in English: Shaked’s party wants to subordinate the Israeli judiciary to parliament. The left calls this fascism, and she is mocking them, saying that her policy is actually more democratic (since it puts parliament over the courts). https://t.co/101gjyoKut

Observers have also noted that the ad may be an attention ploy: Shaked’s party is flagging in the polls, with the election just weeks away.