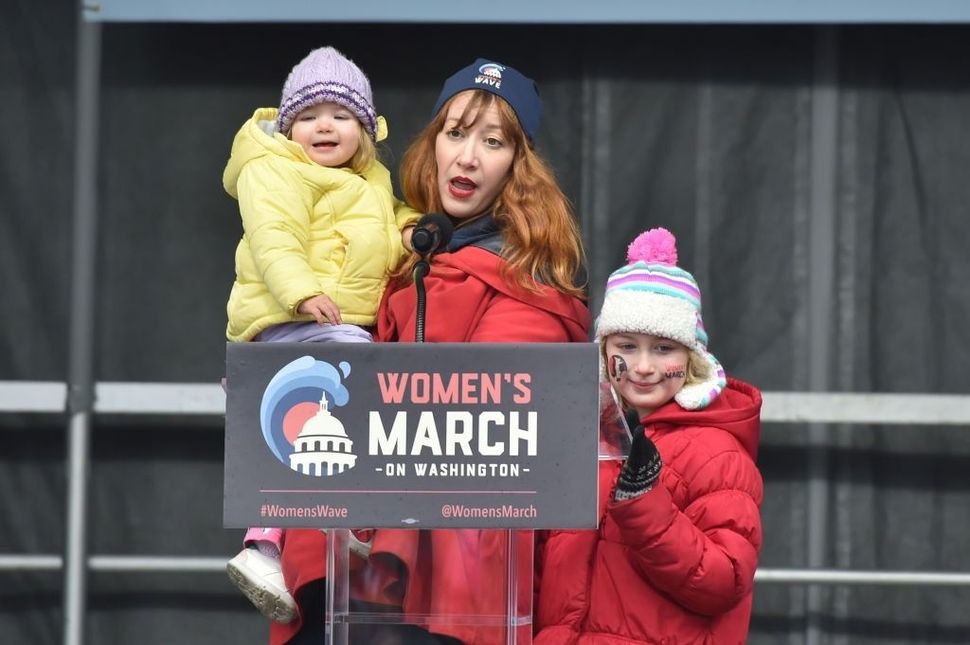 Women’s March organizer Bob Bland speaks on stage with her children during the Women’s March on January 19, 2019 in Washington, DC. Image by Aaron J. Thornton/Getty Images

(JTA) — A co-leader of the Women’s March shared a post blaming the “American Jewish Establishment” for its role in the attacks on two New Zealand mosques, and then apologized.

Bob Bland on March 17 shared a post from Jesse Rabinowitz, a social justice advocate, who wrote that: “The same language and hate that folks spew against Sisters Linda Sarsour and Rep. Ilhan Omar (D-Minn.) killed 54 Muslims in New Zealand. You can’t stand in solidarity with the Muslim community and simultaneously disavow Muslim women for speaking their truths. American Jewish Establishment, I’m looking at you.”

The share was not accompanied by any additional statement from Bland.

In the comments section, a follower called out Bland for suggesting that “that you cannot feel sympathy for the tragedy that happened if you do not agree with Linda and Ilana.” The comment also added: “My biggest fear that the entire purpose of your post was to somehow insult or shame Jews.”

Bland apologized saying that “it has come to my attention that some people are upset that I shared Jesse’s post. I was juggling 2 kids on a Sunday + not being mindful. I’m sorry. I do agree with the first 2 sentences that Jesse said, except I would extend it to all establishment politicians of both parties, of any or no faith. Words matter and I should have clarified.”

“Calling out antisemitism is not bigotry against Muslims. We’ve witnessed this enough times: the zero-sum game these women are playing literally leads to horror. Jews and Muslims are in fact targeted by the same heinous actors within the white nationalist movement across the globe, which is why Jews and Muslims of conscience have come together in solidarity during crises like we witnessed in Christchurch and in Pittsburgh.”