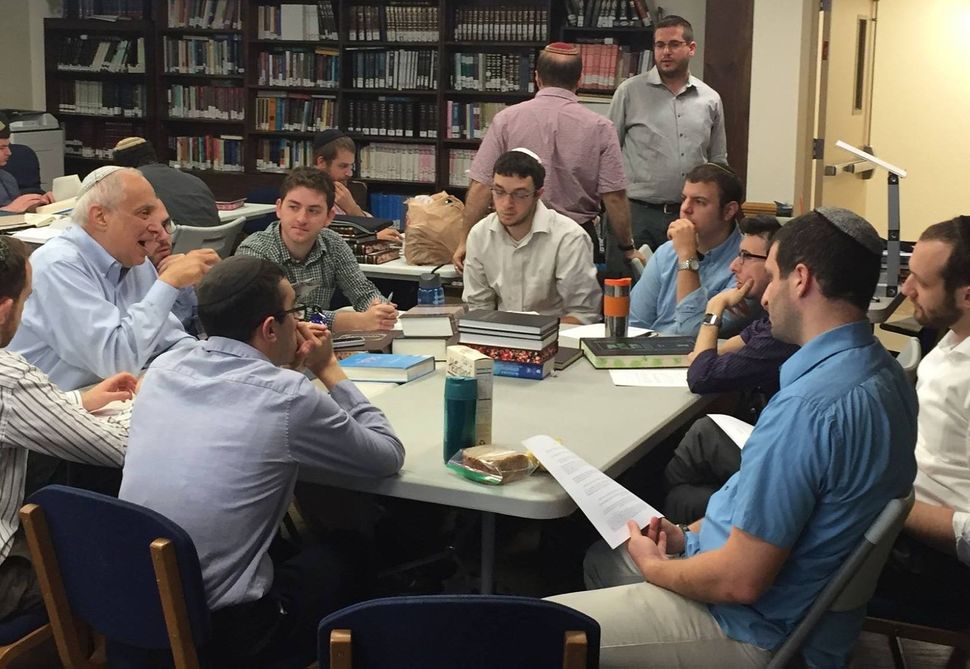 Students at Yeshivat Chovevei Torah in 2015. Image by Facebook

The leading liberal Orthodox rabbinical school told a gay student it will not ordain him, only months before his graduation, the Jewish Week reported. The decision is being widely interpreted as a sign of just how far Modern Orthodoxy, which blends strict observance with progressive social values, is willing to go in adopting pro-LGBTQ stances.

Yeshivat Chovevei Torah told Daniel Atwood, 27, several weeks ago that, after four years at the school, they had decided not to grant him smicha, or rabbinic ordination. He said that he came out as gay in his first year at the school, and that knowledge of his engagement to his partner was widely known in the school.

In a statement to the Jewish Week, Atwood wrote, “I refuse to live anything but a dignified life, something I was always transparent about, including not being closeted or secret about my Torah, my identity, my beliefs, or my relationship.”

Atwood said he would be pursuing private ordination.

The news of Atwood not being ordained has caused an upheaval in the liberal Orthodox world. Chovevei, as the school is commonly referred to, has been the beacon of progressive Orthodoxy for 20 years, and is the flagship institution of the so-called Open Orthodoxy movement. The school’s founder, Rabbi Avi Weiss, was the first Orthodox rabbi to ordain a female rabbi.

Alumni of Chovevei expressed disappointment with the decision to the Jewish Week, and liberal Orthodox Jews condemned the move on social media.

“I’ve never been more disappointed in Modern Orthodoxy and its institutions,” Rabbi Asher Lopatin, the previous president of Chovevei, told the Jewish Week.

Chovevei’s decision was met with approval by the more traditional segment of the Modern Orthodox world.

Wow, tough decision but the right one. Kol Hakavod to @YCTorah for standing up for Halakhah – https://t.co/jOawngaRcK

Chovevei has struggled for years to convince the more conservative and traditional leaders of Modern Orthodoxy that their graduates just as strict in their interpretations halacha, or Jewish law, as graduates of Yeshiva University’s seminary. Some of Chovevei’s more progressive graduates have given the seminary a reputation in more conservative communities of being too revolutionary.

“To have your institution represented by a Chovevei grad is to make a stand on certain halachic issues. And that may be a public relations issue,” Joshua Olshin, president of the board at West Side Institutional Synagogue in Manhattan, told the Forward last year.

In a statement to the Jewish Week, Chovevei’s president and rosh yeshiva, Rabbi Dov Linzer, noted that the school has historically been welcoming to LGBTQ Orthodox Jews. Linzer said that Chovevei was “sorry for the hurt that was caused as a result” of not coming to a decision about Atwood’s ordination sooner.

“We continue to grapple with this issue and are always learning in the process,” Linzer said.