The Last Holocaust-Era Rebbe Dies, And A Neighborhood Shuts Down To Mourn 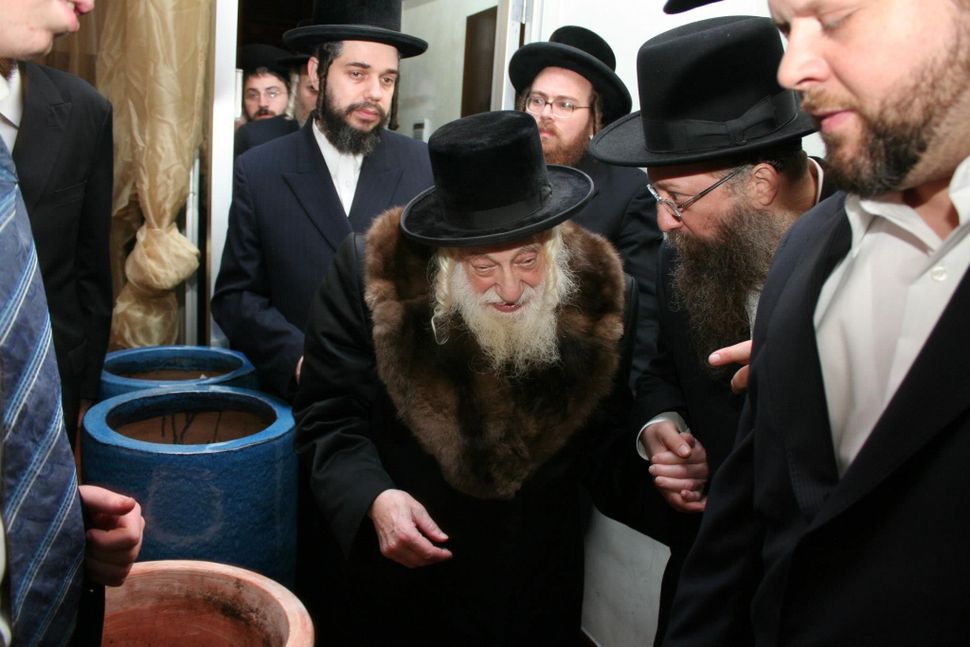 Rabbi Israel Abraham Portugal, the Skulen rebbe, at the Masbia soup kitchen in 2009. Image by Courtesy of Masbia

The Brooklyn neighborhood of Boro Park is all but shutting down on Wednesday to mark the death of Rabbi Yisroel Avrohom Portugal, 95, the last Holocaust-era rebbe to lead a significant Hasidic sect.

Portugal, who served as the rebbe of the Skulen Hasidic group since his father’s death in 1982, was imprisoned in Romania in the late 1950s while aiding Holocaust orphans there. He died Monday at Johns Hopkins University Medical Center in Baltimore.

Some neighborhood yeshivas are closed to mark Portugal’s death, and police reported significant traffic and street closures in advance of the funeral. Social media posts show massive crowds filling the streets in Boro Park. After the funeral, Portugal will be buried in Monsey.

The crowds at the funerals are expected to be particularly large, in part because the need to transport Portugal’s body from Baltimore to Brooklyn meant that the funeral could not be held the same day as his death, which is often the practice in Hasidic communities.

The rebbe of a small Hasidic group, Portugal led no yeshiva, and controlled no large religious institutions. But he was a major figure in the Hasidic community; a lingering tie to pre-Holocaust Europe in an era when the leaders of the major Hasidic sects were born in the U.S. and Israel. Hasidic Jews who follow other rebbes often visited Portugal seeking his blessing.

Portugal was a strict opponent of Internet use, and was one of the organizers of the Orthodox anti-Internet rally at Citi Field in 2013. In the 1980s, Portugal would set fire to a television each year on the eve of Passover, along with the leftover bread that Jews dispose of before the holiday. Alexander Rapaport, executive director of the soup kitchen Masbia, whose grandparents lived across the street from Portugal, said that the rabbi would give blessings in return for promises to follow Jewish law and tradition, and that the televisions came from petitioners who had gotten rid of them at Portugal’s request.

“It always radiated warmth,” Rapaport said of Skulen, Portugal’s small community. “When people came to Boro Park and wanted to see something very Hasidic, they wanted to get a feel of a Hasidic rebbe, they always ended up at Skulen.”

According to most accounts, Portugal and his father left Sculeni, the community in Moldova from which their sect derives its name, before the outbreak of the Second World War. They spent the war in the Ukrainian city of Chernowitz, facing persecution there from both the Germans and the Soviets, who occupied the city at different times. After the war they traveled to Bucharest, Romania, where they sought and cared for Jewish war orphans, and aided the small remaining Jewish communities. Portugal’s father was arrested multiple times.

In April of 1959, Romanian authorities arrested both Portugal and his father for suspected treason. Jewish groups in the U.S. raised concerns about the arrest. According to a 1960 report from the Jewish Telegraphic Agency, United Nations officials intervened to secure the release of the two rabbis, and the U.S. State Department offered them citizenship. They were released in September of 1959, and arrived in the U.S. in August of 1960.

Portugal was known for composing tunes to the Psalms; some of his compositions are sung throughout the Hasidic community. Though he had no yeshiva, he leads a school for children in need in Israel.

Portugal’s wife, Reizel Portugal, died in 2005. He had eight children. According to the Lakewood Scoop, his eldest son, Yeshaya Yaakov Portugal, who lives in Montreal, will succeed Yisroel Avrohom Portugal as rebbe of the Skulen Hasidic group. Other sons lead local Skulen communities.

Correction, April 3: An earlier version of this article stated that the Soviet Union occupied Romania until 1958. In fact, the Soviet Union did not formally occupy Romania after 1945, though Soviets kept troops there, and had significant control over the country.

The Last Holocaust-Era Rebbe Dies, And A Neighborhood Shuts Down To Mourn