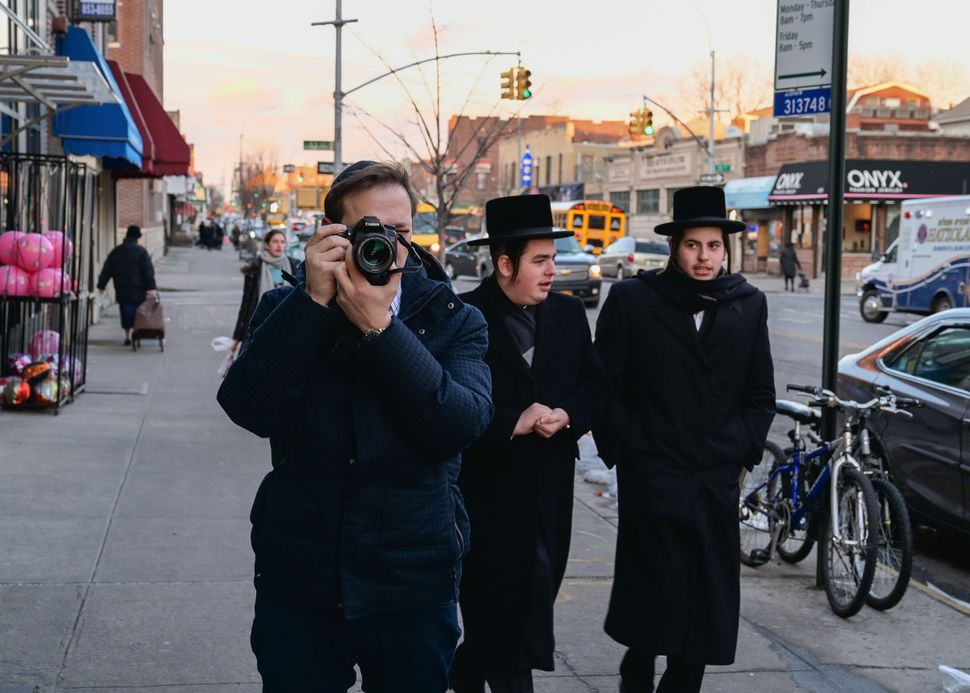 On 16th Avenue and 48th, in the heart of Boro Park, Avi Kaye — not his real name — is sitting in his car, camera ready.

“He’s going to come out soon,” he mutters. We’re parked outside the Beis Midrash Emunas Yisroel synagogue, waiting for one subject — a regular at this shul, who will walk in any minute now for mincha, the afternoon service.

Two Hasidic young women are standing outside, talking. One of them notices Kaye’s camera and raises an eyebrow. Busted. He drives away.

Avi Kaye knows 16th Avenue well. He spent his childhood on the pavements of Boro Park, one of the local cheyder boys with sidelocks— and now, he’s back, but with his ubiquitous camera, devoted to documenting this community. I first meet Kaye at Boro Park’s Cafe Paris, a popular lunch spot, frequented that afternoon by Hasidic housewives. He shows up in a velvet yarmulke and a v-neck sweater, cleanly-shaven and around the age of forty — and asks me to please refer to him as “Avi Kaye,” and not by his real name.

“In order to achieve my goal of documenting Hasidic life, it’s best for me to keep my identity private,” Kaye tells me over coffee. “If my identity was revealed, it would go viral among the Hasidim, and that would affect my ability to do what I do.”

Kaye is an Orthodox street photographer. His family immigrated from Israel when he was an infant, and struggled integrating into Brooklyn’s iron-gated Orthodox schools, so Kaye was sent to study in the one school that would take him, Boro Park’s Belz Hasidic cheyder, where he says he was often beaten up by the other students. Hasidic Jewish boys at a tisch. Image by Avi Kaye/Hasidim in USA

“It was the 80’s, I was an outsider, the only non-Hasidic boy in school,” he says. “The struggle of being different was extremely tough.”

But Kaye had one outlet — photography. At family and local shul events, there was little Avi with his camera, taking pictures of everyone.

At nineteen, Kaye went to study in the Mir Yeshiva in Jerusalem. It was just when the first intifada erupted, and it was then that he started looking at photography differently — he would rush over right after a bombing to photograph the scene, then sell the photographs to Israeli media outlets. After a stint in Lakewood’s Beth Medrash Govoha yeshiva — Kaye returned to his childhood home, to the streets of Brooklyn.

“I was inspired by Roman Vishniac,” Kaye says, referring to the Jewish photographer most famous for documenting pre-Holocaust European Jewry. “No one documented Hasidim the way he did. That captured me. I read how he had a hidden camera that he would use, that’s something that really got to me.” 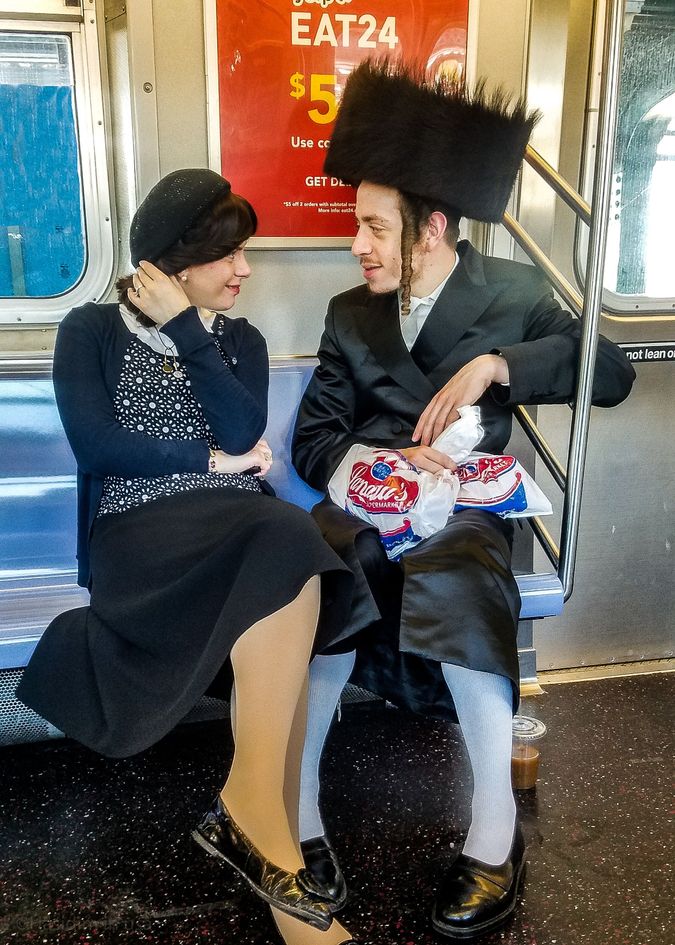 A Hasidic couple on the subway. Image by Avi Kaye/Hasidim in USA

And so began Kaye’s guerrilla photography career around Williamsburg and Boro Park, and eventually, Jerusalem, as well as the occasional trip to upstate New York’s Orthodox shtetls — New Square, Kiryas Joel, and Monsey.

Obsessed with documenting daily Hasidic life, Kaye started posting his photographs online, as a hobby, on an Instagram account called “Hasidim in USA”, which quickly grew to over 20,000 followers. A young boy going home from cheyder, an old zeyde leaving the grocery store, two Bais Yaakov girls giggling on a street corner. There’s no room for politics, no room for debates over Orthodoxy, extremism, education — there’s only room for humanity. There are also, interestingly, no rebbes. “I don’t focus on the rebbes,” Kaye says. “I want to portray daily candid life. Simple moments. The intimate photos are very hard to get. But that’s what I try to do. Just people walking in the street doesn’t do it for me.” 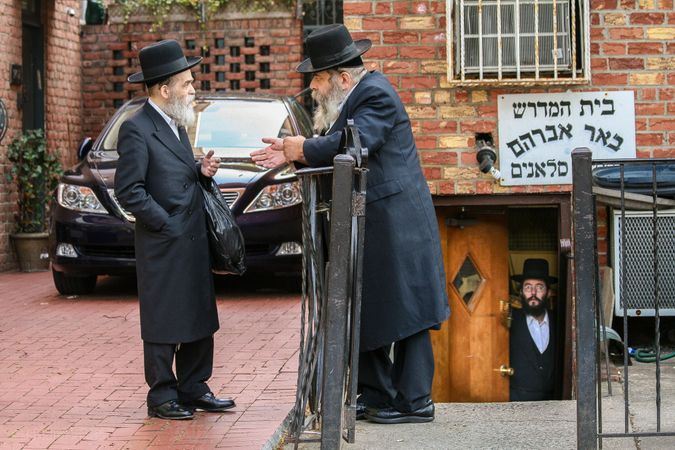 A conversation in Boro Park. Image by Avi Kaye/Hasidim in USA

At first, the pushback on his work was harsh, as community members would spot themselves, or friends or family, on Kaye’s Instagram — despite the fact that the Internet and social media, are officially banned by authorities. “All these people sent me DM’s, how dare I, who gives me the right, that it’s disgusting what I do,” Kaye says. “That I’m violating people’s privacy. People ask me to remove photos. Hasidim don’t want people coming near them, showcasing everything, even though it can be in a positive light. When I went to [the Hasidic village of] New Square, they told me that if I come again, they will have me arrested.” 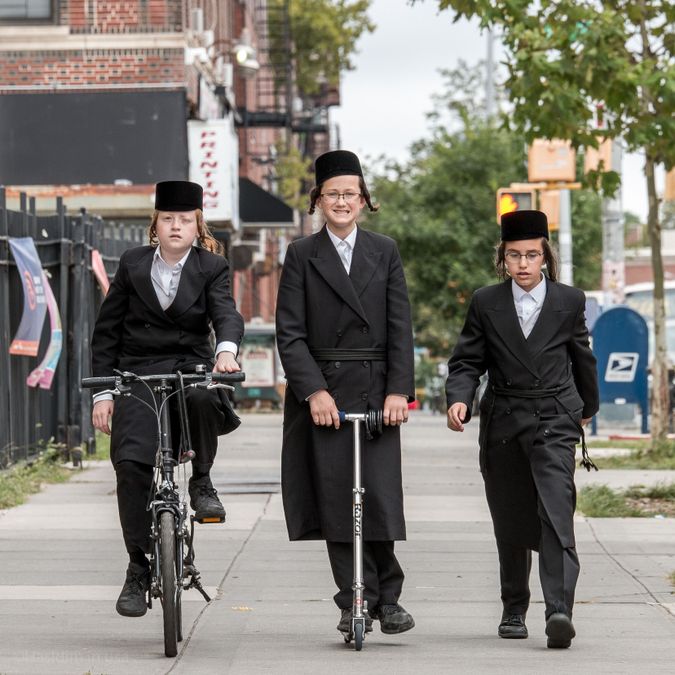 Hasidic boys in the street. Image by Avi Kaye/Hasidim in USA

But as more and more Hasidim are becoming fluent in social media, the feedback has grown more positive, Kaye says. “Now, cameras are everywhere, it’s the 21st century. They’re adjusting to it. Still, my wife is worried, because there are radicals out there…” his voice drifts off.

As we walk along Boro Park, Kaye’s eyes grow squinted, focusing in on the details around us, on the sweeping scene of figures rushing around 16th Avenue. He isn’t focusing on the conversation any more — now he’s in his mode, anthropologist meets portrait-maker. “I find the combination of the shtetl and twenty-first century lifestyle very captivating,” he tells me. “And I’m uniquely positioned to do this. When a Gentile or a secular Jew walks around here photographing — right away the red alarm bells go off: ‘What’s he doing? Investigating something?’ But I speak Yiddish, I know the fine line of overstepping limits — and I also know what some Joe-Shmoe in Texas would be interested in seeing, in a photograph.” 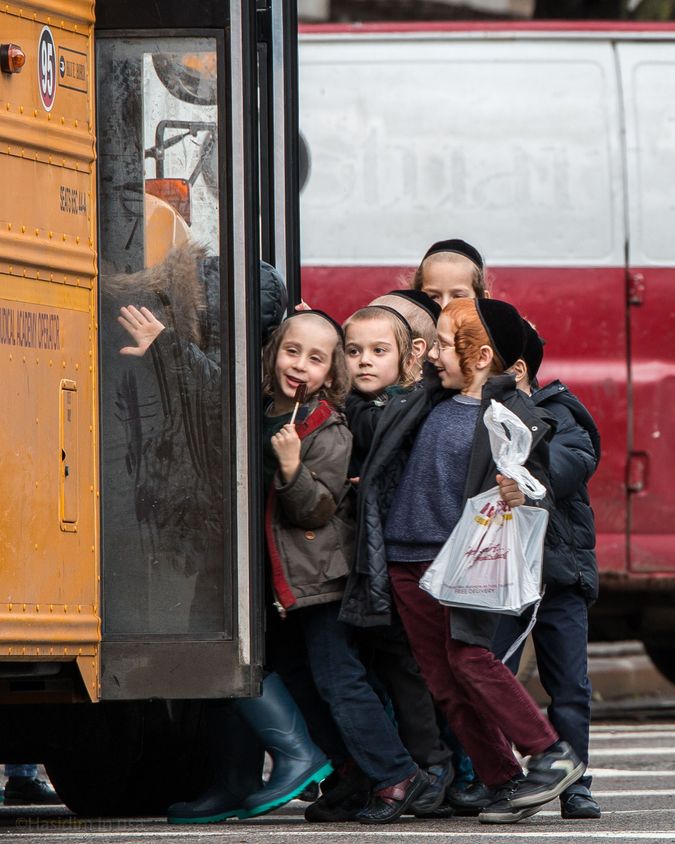 Image by Avi Kaye/Hasidim in USA

Driving around with him one afternoon, I felt the rushing adrenaline of his work — Kaye employs both “hip photography” (discreetly shooting from the hip, holding the camera low) as well as long-lens shoots from his car, often carrying his camera in a tallis bag. On a bustling 16th, he passes by two young married women in a heated conversation, and with astounding alacrity, he checks his rear-view mirror, backs up the car, whips out his camera and takes a series of shots. The women keep talking, one flashes a smile at her friend, and he captures it and exclaims from happiness: “Yes!” Then his time is up — one of them has noticed him. “Shkoyech,” he says to them — and drives on. 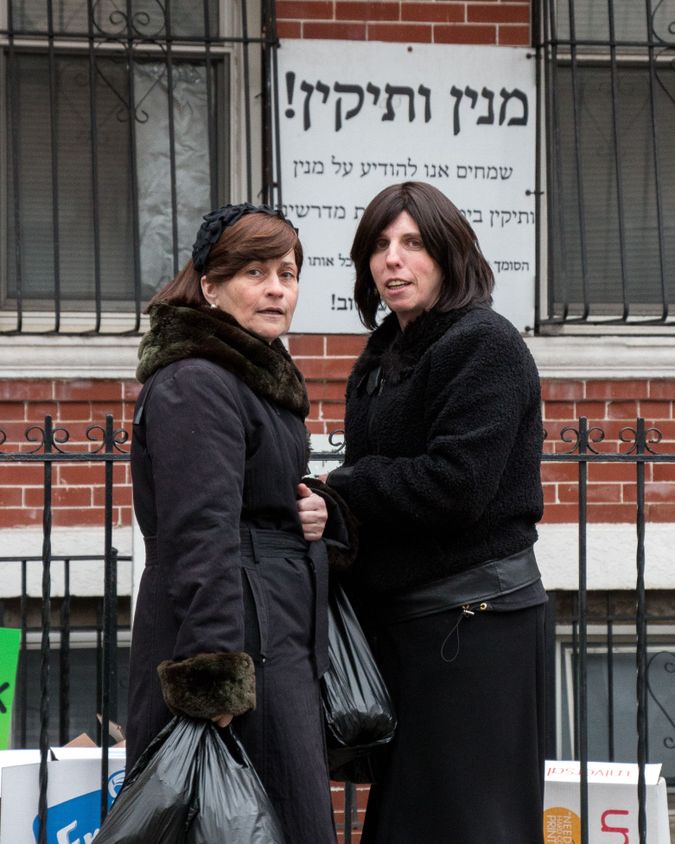 “You see this window?” He points to a pink pastel building. “I got a shot here that I waited a year for. My brother spotted an old woman sitting by the window once, and told me I ought to capture this. So I kept coming back here, knowing that if an old woman sits at the window, it is probably a habit. And sure enough, I got it.” 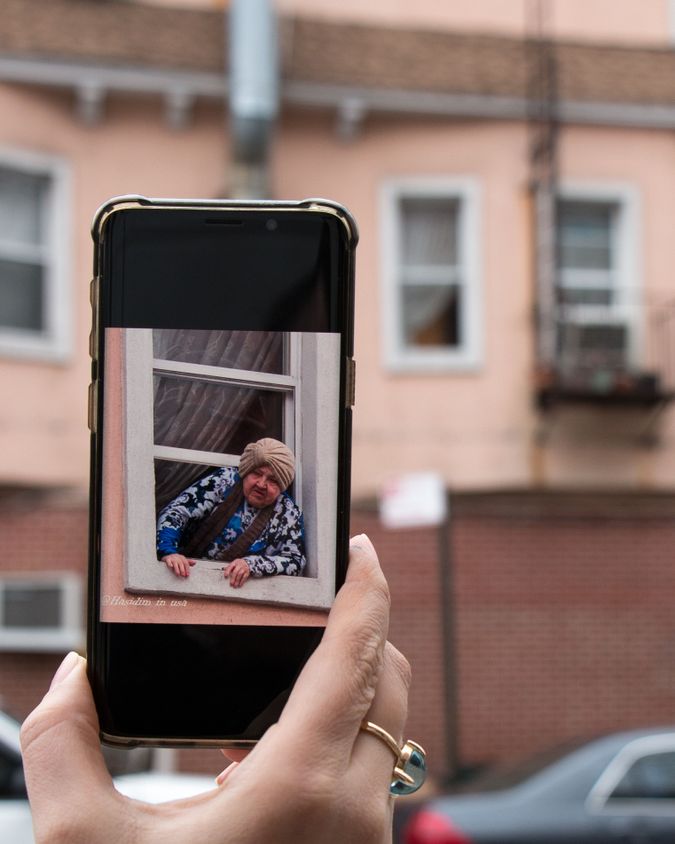 A Hasidic Jewish woman in Boro Park - a moment that Kaye attempted to capture for an entire year. Image by Avi Kaye/Hasidim in USA

“The older women are much easier to photograph,” Kaye says. “‘It’s a bubby,’ people say. But with the young women, in their 20s and 30’s, they’re much more complicated, people get upset about that. So maybe only ten-percent of my pictures are of women.”

Suddenly, with Kaye, I find myself seeing the neighborhood differently. I’ve visited Boro Park countless times — both as a journalist and as an Orthodox Jew — after all, it’s the capital of frum shopping, of modest dresses, religious books and bargain groceries. But now, the streets here seem to have shifted. Every piece of sidewalk is now a stage, every passerby a cast-member in the drama that is religious life.

Perhaps the only way to truly portray an insular community is to be at once an insider and an outsider — to be both embedded in the culture, but just distant enough to be able to capture the full scene in a frame.

“I’m in a strange position,” he says with a laugh, gesturing with his hands in the movement of weighing scales. “But I tell the people who object: One day, you’ll look back and appreciate what I did.”