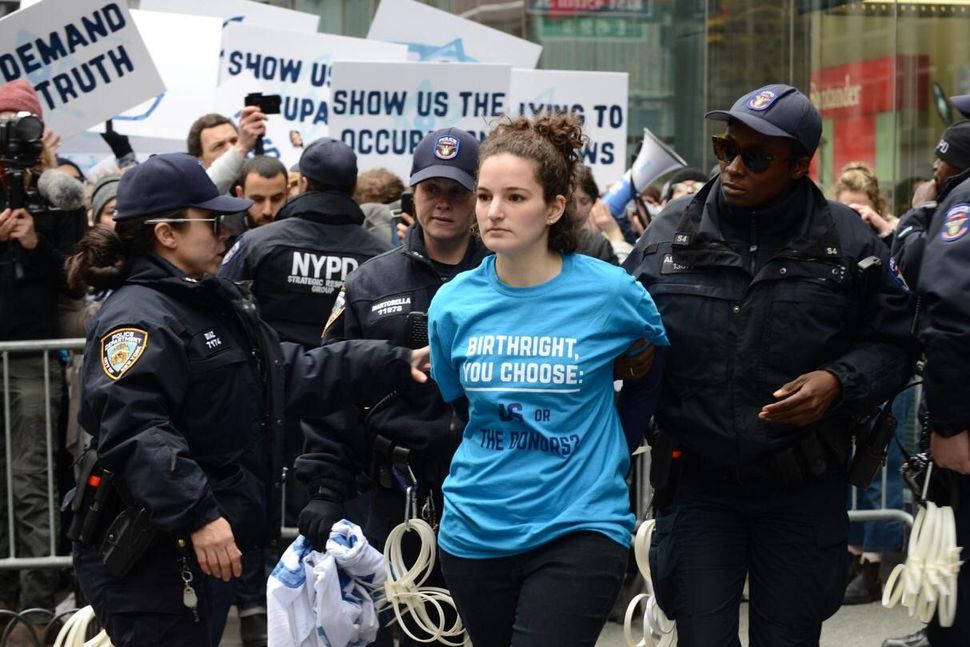 NEW YORK (JTA) — Fifteen activists from IfNotNow, a Jewish group of millennials that protests Israel’s control of the West Bank, were arrested Friday while demonstrating outside Birthright Israel’s offices in New York City.

The activists were college students, according to IfNotNow, which has been protesting Birthright in a variety of ways since last year, including walking off of its free 10-day trips to Israel.

IfNotNow members have been arrested previously while protesting other major Jewish groups, such as the Anti-Defamation League.

The arrests at Birthright took place at the end of a 90-minute protest outside of Birthright’s Manhattan offices. At first, more than 100 activists blocked Third Avenue, a busy thoroughfare, during rush hour. They were cursed by commuters and honked at by vehicles backed up in traffic.

After about 20 minutes, the protesters moved to the sidewalk in front of Birthright’s office building, and 15 activists blocked the entrance, sitting in a row.

Protesters held signs reading “Confront the crisis” and “Stop lying to young Jews.” Their shirts read “Birthright, you choose: Us or the donors.” An IfNotNow spokesman said activists had also attempted to speak to Birthright staff in the building.

After about another hour of protesting and repeated warnings to disperse by about two dozen police officers who had massed by the sidewalk, the police arrested the activists blocking the door. They did not resist and were loaded into two police wagons.