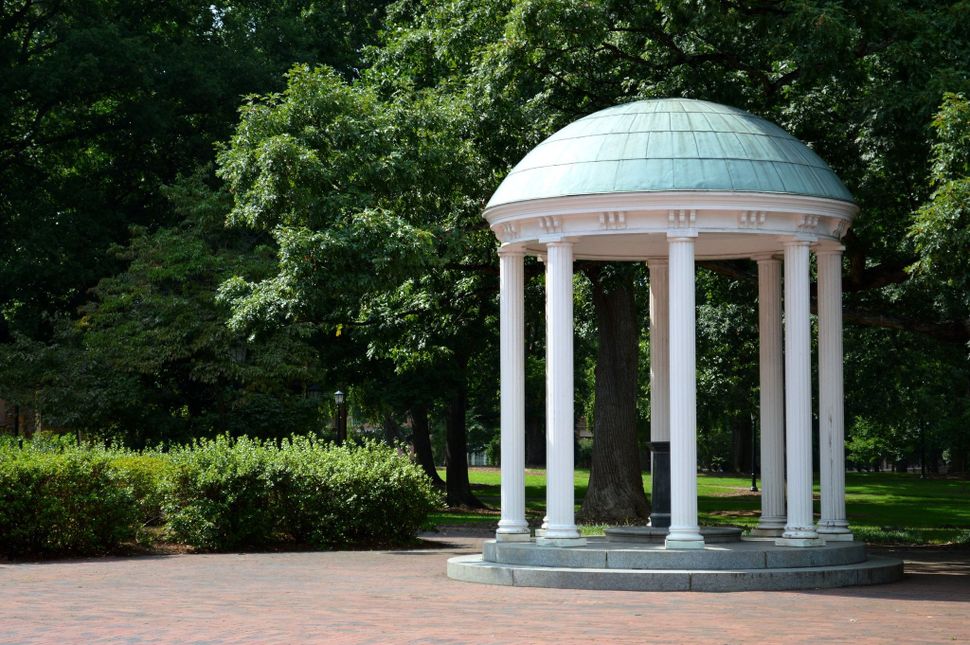 The Old Well at the University of North Carolina. Image by William Yeung/flickr/Creative Commons 2.0

Anti-Semitic posters were found on bookshelves and tables at a library at the University of North Carolina on Wednesday. It’s the second racist incident to occur at the school in the past two weeks.

The posters, which warned of an “evil Jewish plot,” were condemned by the university administration.

“I am extremely disappointed and appalled that anyone would write the abhorrent messages and direct them toward members of our Jewish community,” interim chancellor Kevin Guskiewicz said in a statement. “This behavior conflicts with the University’s long-standing commitment to fostering an environment where all students, faculty and staff can be free from harassment.”

Two people were arrested last week for vandalizing a campus statue memorializing slaves who helped build the university. Guskiewicz said in his statement that the university believes the incidents are unrelated.

Around 1,000 Jewish undergraduate students attend UNC, according to the Forward College Guide. Jewish campus groups also spoke out against the incident.

“When we are faced with this type of darkness, there can only be one response: increasing the light,” Rabbi Zalman Bluming, executive director of Chabad of UNC/Duke, said in a statement. “We will not be bullied or intimidated. On the contrary, we will in fact intensify our activities on campus aimed at increasing knowledge and pride in our Jewish heritage.”

NC Hillel director Ari Gauss told the Charlotte Observer that students were surprised because anti-Semitic incidents had not occurred before at the school, though they had at other universities in the state. But in light of the mass shooting at a Pittsburgh synagogue last year, the incident had to be taken seriously: “History shows us that you can’t ignore people who hate Jews,” he said.

The Anti-Defamation League has seen a surge of white supremacist propaganda at universities throughout the country in the last two years.