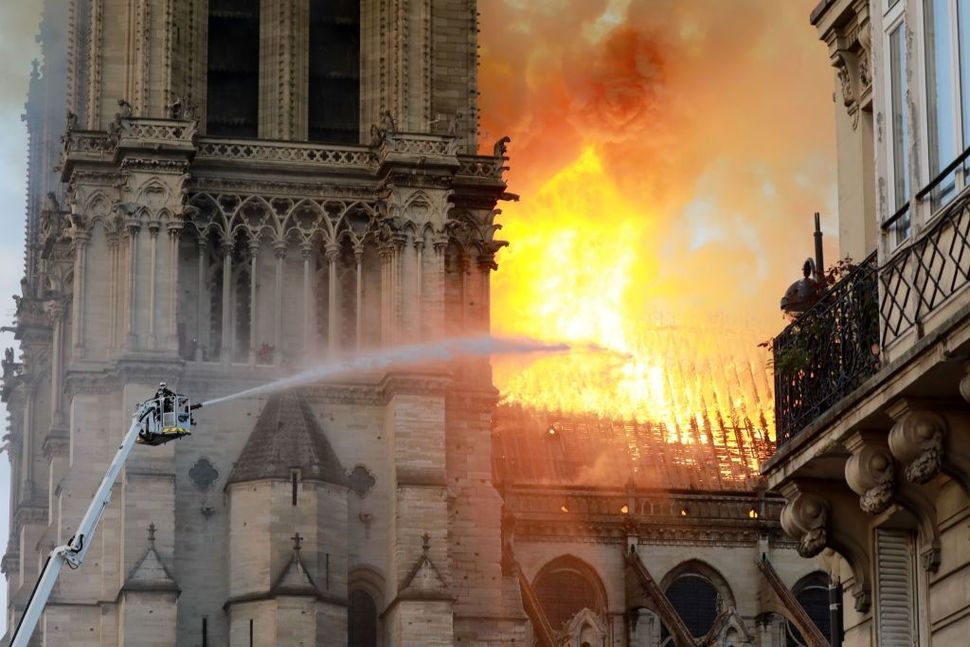 A firefighter is seen fighting the flames at Notre-Dame Cathedral April 15, 2019 in Paris, France. Image by Pierre Suu/Getty Images

As the Notre Dame Cathedral in Paris became engulfed in fire on Monday, conspiracy theorists quickly got to work – blaming the blaze on Jews.

French police quickly said they were treating the fire as an accident, possibly linked to the church’s renovation work. But despite – or perhaps because of – that statement, online bigots quickly got to work. Many pointed a finger at the Rothschilds, the banking dynasty of Jewish heritage who have been central to anti-Semitic conspiracies for century. French President Emanuel Macron once worked at a Rothschild-owned bank. Others tried to link the incident to other church fires that had occurred throughout the country in recent weeks.

ARSON =133. NOTRE DAME CATHEDRAL =331. It happened 3301 MONTHS after the birth of Mayer Rothschild and 133 YEARS after the death of Victor Hugo (author of The Hunchback of Notre Dame) as well as a perfect span of 1033 MONTHS 3 WEEKS 3 DAYS after the Reichstag Fire in ‘33.

I am pretty sure that the fire at Notre Dame was started by muslims.

Massive Muslim migrants arrive and in less than 5 years, it’s burning to the ground.