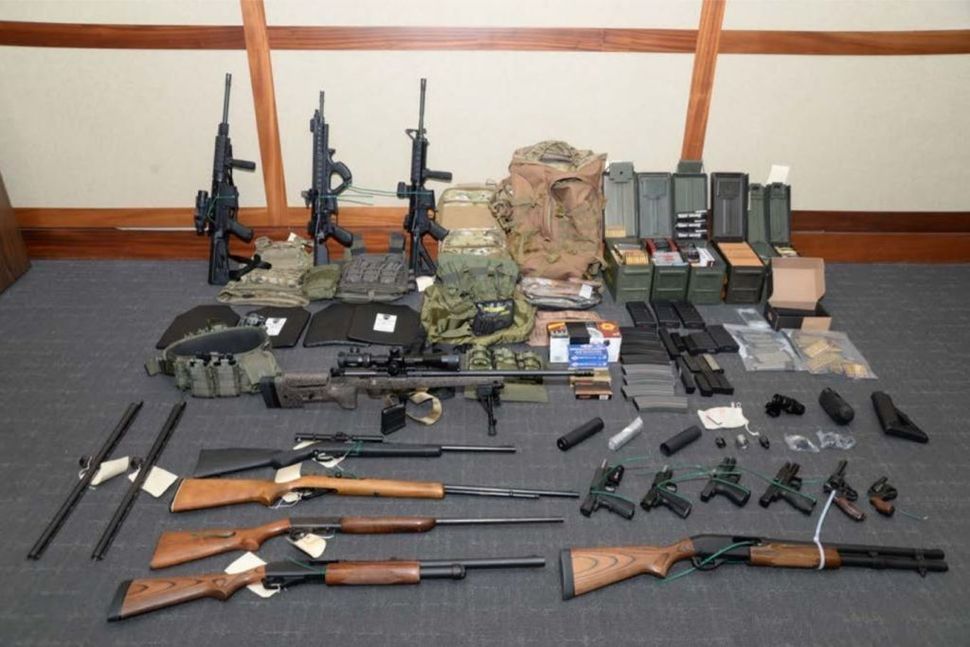 The collection of weapons and ammunition federal agents say they found in Christopher Paul Hasson’s Silver Spring, Maryland apartment. A member of the U.S. Coast Guard, Hasson was arrested on weapons and drugs violations and is accused of plotting a major terror attack against Americans. Image by U.S. Attorney’s Office for the District of Maryland via Getty Images

A self-described white nationalist Coast Guard officer who was arrested after being accused of plotting a domestic terror attack can be released from prison before trial, a judge ruled Thursday.

Christopher Hasson, 50, allegedly stockpiled weapons and made a “hit list” of prominent Democrats and journalists, and was accused of firearms and drug charges. But because he has not been formally charged with terror-related offenses, he is entitled to be released before trial, Judge Charles Day ruled.

Day said he still had “grave concerns” about Hasson and that it would take a few days to come up with a release plan with sufficient supervision of the defendant, likely to include home confinement with restricted access to weapons and computers, NBC reported.

Prosecutors, who said Hasson was plotting an attack based on the killing spree of Norwegian mass murderer Anders Breivik, have pledged to oppose any release from prison.

According to CNN, Hasson’s public defender, Elizabeth Oyer, said that the list of names Hasson allegedly compiled was not a hit list, but rather “looks like the sort of list that our commander in chief might have compiled while watching Fox News in the morning.” She also tried to downplay the racial epithets Hasson allegedly wrote, saying, “Donald Trump uses similar epithets in his everyday language and tweets.”