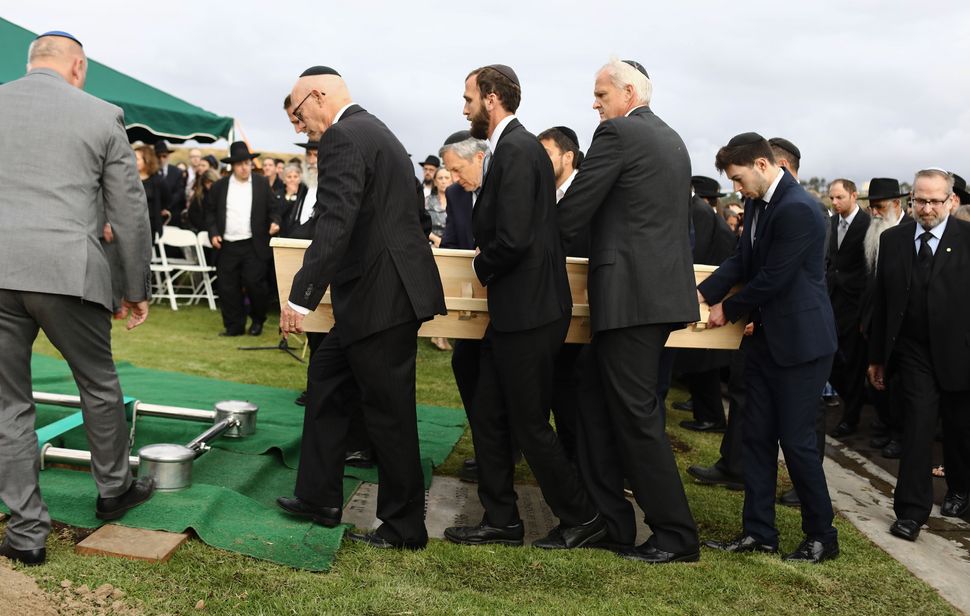 The funeral of Lori Gilbert Kaye, shot in a San Diego synagogue. Image by Getty Images

The religious background of the suspect in the synagogue shooting that killed one woman in San Diego last weekend, and the articulation of Christian theology in a manifesto attributed to him, is setting off a debate among Christian pastors, the Washington Post reported Wednesday.

John Earnest, the 19-year-old man who has pled not guilty in the attack, regularly attended an evangelical church, and cited Calvinist ideas about the nature of salvation in the manifesto he reportedly posted online shortly before allegedly committing the murder, the Washington Post reported.

“Obviously something went wrong,” Reverend Duke Kwon, a religious leader in a church similar to Earnest’s, told the Post. “I think it’s important for Christians, both those in the pews as well as those in the pulpit, to take a moment for some self-reflection and to ask hard questions.”

A historian at Messiah College, John Fea, told the Post that the denomination Earnest belonged to, called the Orthodox Presbyterian Church, embraced replacement theology, the idea that Christians replaced Jews as God’s chosen people. “If you believe in this replacement theology, that’s not an incentive to go kill Jews, but it does mean Jews are not as important anymore in God’s plan,” Fea told the post.

Earnest’s denomination denounced the attack. “Anti-Semitism and racist hatred which apparently motivated the shooter . . . have no place within our system of doctrine,” the church said, according to the Post.