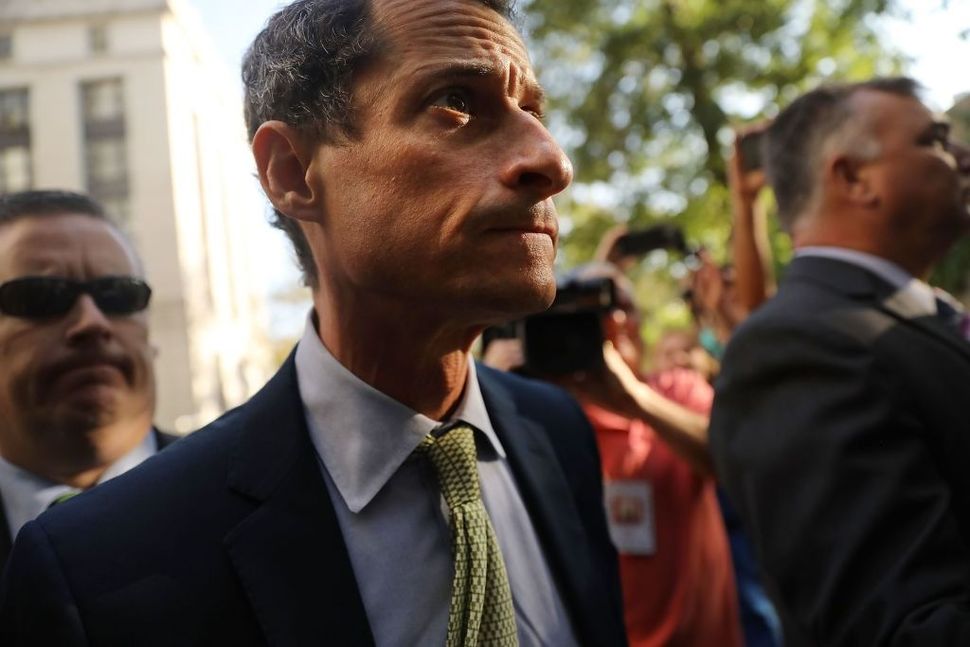 Former congressman Anthony Weiner arrives at a New York courthouse for his sentencing in a sexting case on September 25, 2017 in New York City. Image by Spencer Platt/Getty Images

(JTA) — Anthony Weiner, the former New York congressman sentenced to 21 months in federal prison for sexting with a 15-year-old girl, was released from a New York City halfway house.

Weiner completed his sentence and left the halfway house where he had spent the past three months in a federal reentry program, on Tuesday morning, the New York Post reported. He also had three months shaved off his sentence for good behavior.

“It’s good to be out,” he told the Post. “I hope to be able to live a life of integrity and service. I’m glad this chapter of my life is behind me.”

Weinerm 54, will have three years of supervised release and is required to register as a Level 1 sex offender, the lowest level.

The Post reported that he is now hoping to land a book deal.

Weiner pleaded guilty in May 2016 to one charge of transferring obscene material to a minor and had faced up to 10 years in prison.

In the fall of 2016, then-FBI Director James Comey cited emails involved in the Weiner case to reopen an investigation into Hillary Clinton’s private server less than two weeks before the presidential election. The FBI shut down the investigation days later, saying that nothing new or damaging had come to light, but Clinton blamed the new probe in part for her loss to Donald Trump.

Weiner’s troubles date back to 2011, when the Jewish lawmaker resigned from Congress after tweeting an explicit photo. He has since been involved in multiple sexting scandals.