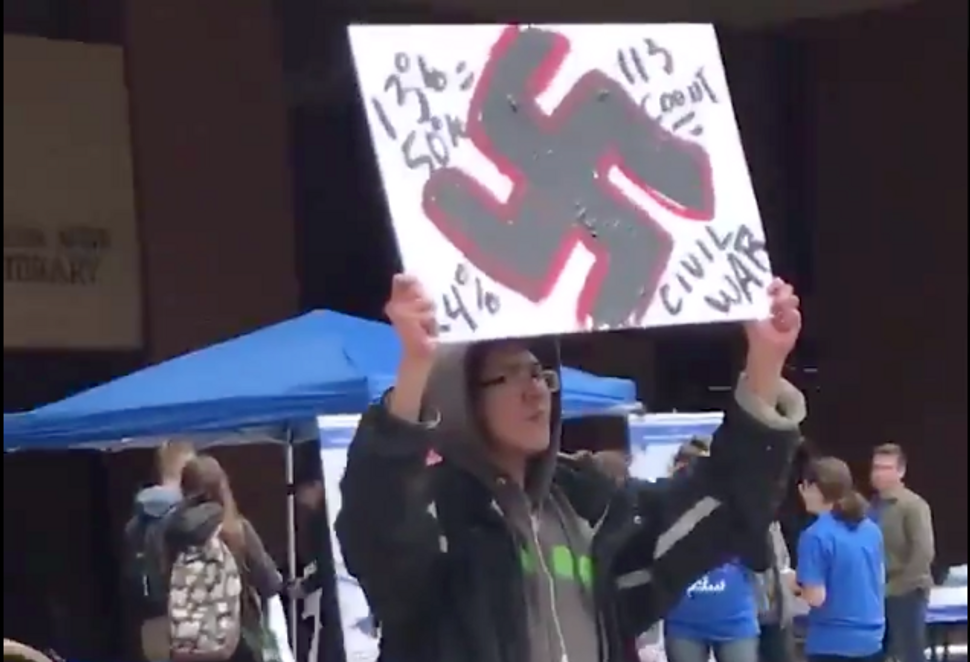 The University of Wisconsin-Milwaukee won’t discipline the student who held up a sign with a swastika that called for gassing Jews, noting it was “freedom of speech,” the Jewish Chronicle reported.

Kristian Gresham held the sign on May 6, at a campus Israel Independence Day event. The front featured a swastika, and the back said “gas” above triple brackets, a symbol used by anti-Semites to refer to Jews.

Police were nearby but didn’t intervene until other students tried to take down the sign, video showed.

Gresham, 26, told the Jewish students who approached him that he thought his sign was “funny.”

In addition to going on a racist rant, he claimed that Jews were behind the opioid crisis and supported “many abortions.”

At the University of Wisconsin – Milwaukee, @uwmpolice stand idly by as a student taunts his #Jewish peers with a swastika for over 3 hours. @UWM, is this what student fees are going towards? pic.twitter.com/oakNTCKpr7

University of Wisconsin-Milwaukee chancellor Mark Mone said the day after the event that Gresham was exercising his free speech rights, and that the school “will always be a forum for the free exchange of ideas, even when those ideas are hateful or repugnant and challenge our thinking in dreadfully unsettling ways.”

“Nevertheless, please know that we emphatically renounce such hateful symbols and do not support or condone any viewpoint that is hurtful, harmful or disparaging,” he continued.

University police agreed that Gresham’s activities were protected under the First Amendment, according to Wisconsin Public Radio.

Mone put out another statement last week, apologizing for appearing insufficiently condemnatory in his previous statement.

A petition to have Gresham expelled has received 1,100 signatories. “What Kristian Gresham did was not just an expression of speech,” it read. “He threatened the safety and education of his fellow students. ‘Gas the Jews’ is not protected free speech. It’s incitement of violence against the Jewish community on campus.”