Pennsylvania Lawmaker Refuses To Apologize For Selfie With White Supremacist 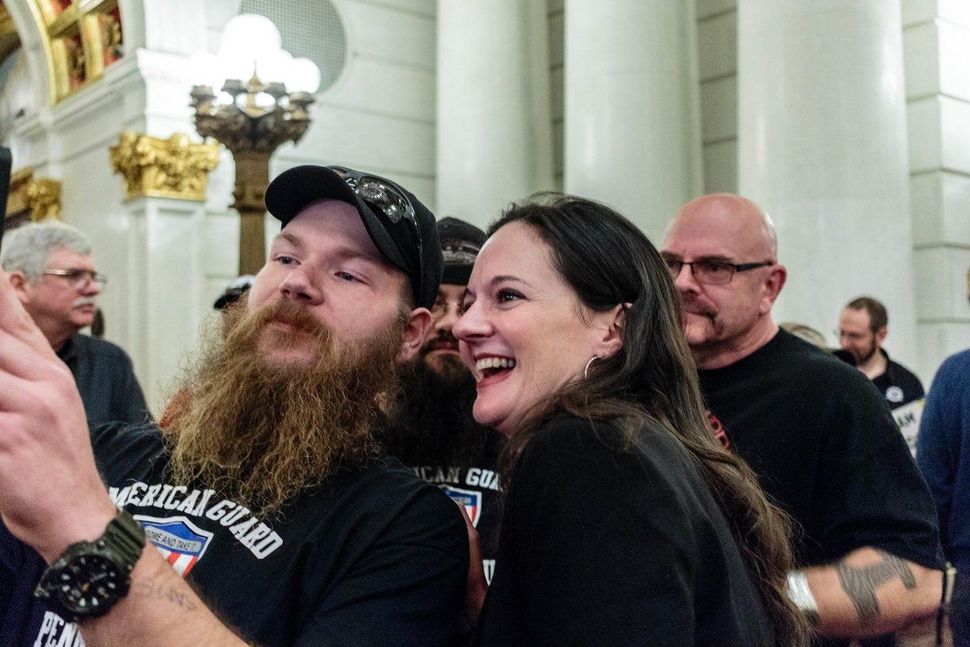 Pennsylvania state Rep. Stephanie Borowicz posed for a selfie with a member of the white supremacist group American Guard. Image by Sean Kitchen/Twitter

A state representative in Pennsylvania refused to apologize after taking a selfie with a member of a white supremacist group, the Jewish Exponent reported Wednesday.

Rep. Stephanie Borowicz posed with a member of The American Guard at a gun rights rally at the state capitol in Harrisburg on May 6, which was spotted by progressive activist Sean Kitchen in a photo of his own.

The Anti-Defamation League described the group in 2017 as being “hardcore white supremacists.” The man Borowicz posed with was wearing an American Guard t-shirt, which includes the group’s logo of two crossed butcher knives.

Borowicz refused to take questions from reporters on the incident after it occurred, but said in a statement a few days later that she is asked to take selfies all the time with all sorts of people.

“We do not, nor should we, require ID or background checks as a condition for being photographed with the people of Pennsylvania — our constituents! The many photos taken of me at this year’s Rally to Protect Your Right to Keep and Bear Arms are no different,” she said, according to the Pittsburgh Post-Gazette.

The Post-Gazette noted that Borowicz’s statement did not include an apology or any condemnations of white nationalism.

The Anti-Defamation League had called on Borowicz to apologize after the incident occurred; ADL regional director Nancy Baron-Baer told the Jewish Exponent on Wednesday that it was “irresponsible for state legislators to pose for selfies with white supremacists,” and said that their researchers had identified the man in the photo as being “connected to multiple right-wing extremist movements.”

Borowicz also did not respond to multiple requests for comment from the Jewish Exponent.

She first gained national attention in March when her prayer opening the day’s legislative session ended with, “Every tongue will confess, Jesus, that you are Lord,” a phrase that was seen as a slight to Rep. Movita Johnson-Harrell, the first female Muslim member of the state house, who was about to be sworn in after her election.

Pennsylvania Lawmaker Refuses To Apologize For Selfie With White Supremacist