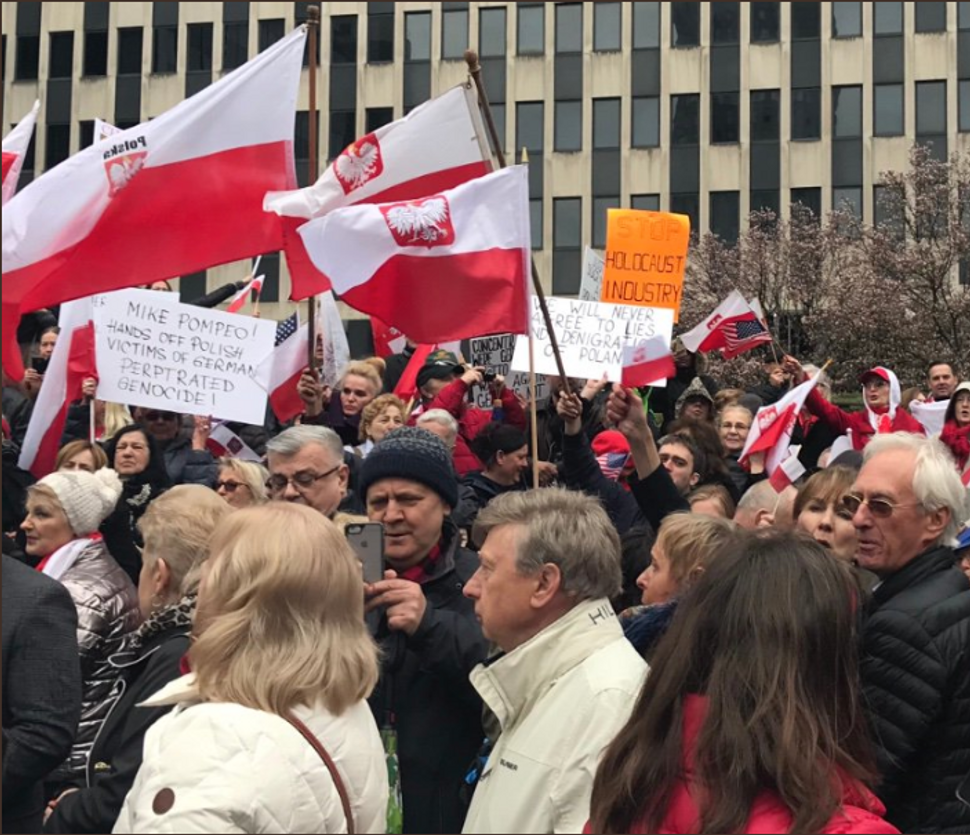 WARSAW, Poland (JTA) — Jewish leaders are warning about anti-Semitic speech here amid a debate over the fate of property seized from or abandoned by Jews during the Holocaust.

The Association of Jewish Religious Communities has appealed to Polish politicians to “abandon hate speech towards Jews.”

Politicians on the extreme right raised the topic of property restitution ahead of this week’s elections for the European Parliament. The vote in Poland is being held Sunday.

Members of a far-right coalition called the Confederation are protesting American legislation meant to ensure that survivors of World War II or their heirs receive compensation for their losses. According to the law, the U.S. secretary of state is to prepare a progress report this year on the fate of property left behind during the war in 46 countries, including Poland.

The debate led to sparring between the ruling right-wing Law and Justice Party here and the opposition. One opposition leader, former prime minister Wlodzimierz Cimoszewicz, refuted the claims of the right-wing critics of property restitution by saying “nobody will take away from the heirs the right to go to court and claim their property.”

Cimoszewicz also criticized the right for claiming that “world Jewish organizations” would claw back property not claimed by actual heirs. Property with no living heirs will not be passed on to anyone, he said, and would remain the property of the Polish state.

Jarosław Kaczynski, leader of the Law and Justice Party, fired back, saying Cimoszewicz’s “statement is full of resentment towards Poland and Poles.”

Kaczynski stressed that Poland would not agree to any claims and “does not intend to pay anything.” He said it was the Germans who attacked Poland and murdered “almost all Jews,” and the Jews who survived, he said, were saved by Poles.

Before the Holocaust, over 3 million Jews lived in Poland. About 300,000 of them survived, the vast majority of them in the Soviet Union.

Kaczynski stressed that anyone who votes for the European Coalition formed by the liberal, central and left-wing opposition parties to which Cimoszewicz also belongs will be responsible for Poland “once again being subjected to various types of economic repression.”

According to surveys, the far-right Confederation is gaining popularity, with about 7 percent of potential voter support, and helping make restitution a campaign issue.

Prime Minister Mateusz Morawiecki said at the beginning of the month that Poland was the greatest victim of the war.

“We were the most murdered victims here during the Second World War and we will never agree to any payments for anyone for this reason, any compensation,” Morawiecki said.

Poland is restoring prewar cemeteries and old synagogues to organized Jewish communities, but has not introduced a law regulating the return of private property.

“Restitution issues concern all Polish citizens, regardless of their ethnic origin and requires serious legislative work,” the Association of Jewish Religious Communities said in a statement posted on Facebook. The organization emphasized that it will be happy to join the substantive discussion “in order to solve the problem and not to escalate hateful and false statements in relation to our minority.”

“We also call for respect for the victims of the Holocaust and the Righteous who were saving [Jews], despite the threat to their lives, who did so in the name of common values,” the group said.