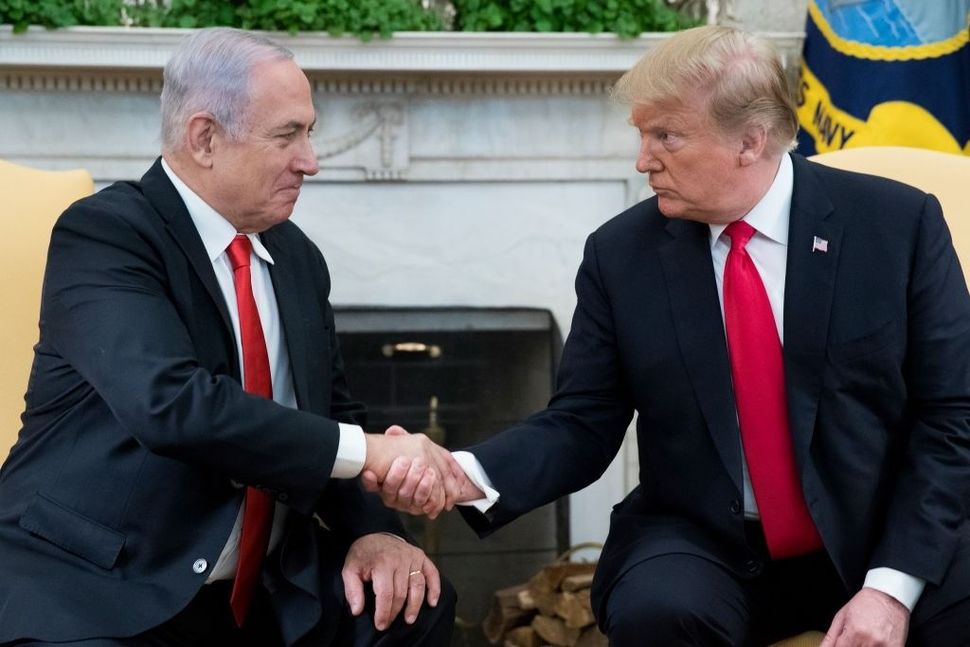 “Hoping things will work out with Israel’s coalition formation and Bibi and I can continue to make the alliance between America and Israel stronger than ever. A lot more to do!” Trump tweeted on Monday.

“We are shocked by President Trump’s intervention in Israeli domestic politics,” a senior official from the opposition Blue and White Party led by Benny Gantz told Barak Ravid, a senior correspondent with Channel 13.

Ravid in a tweet called Trump’s move “unprecedented,” noting that it was done to help Netanyahu and was done publicly.

Netanyahu referred to Trump’s tweet in a public statement from the Knesset on Monday night. He thanked Trump for the tweet and added: “Trump is right – we still have a lot of work to do.”

Netanyahu used images of him and Trump together on billboards during the last election campaign, Ravid pointed out in a series of tweets. And Trump recognized the Golan Heights as part of Israel two weeks before the April 9 elections, in a move that some said was designed to help Netanyahu.

Hoping things will work out with Israel’s coalition formation and Bibi and I can continue to make the alliance between America and Israel stronger than ever. A lot more to do!

Netanyahu called on Avigdor Liberman on Monday to join the government coalition and prevent the country from heading to new national elections.

Netanyahu also promised that he would do everything possible to avoid going to new elections less than six months after the last ones.

Netanyahu has until Wednesday to form a majority ruling government coalition, but has been stymied in his efforts in large part over the military draft law. The haredi Orthodox parties want changes to the law that would allow more leniency in drafting yeshiva students, while Liberman, head of the Yisrael Beiteinu Party, insists he will not join the government unless the legislation’s restrictive language remains intact.

Netanyahu has not yet signed a coalition agreement with any party, as each waits to see what kind of deal the others will sign.

Netanyahu met Monday night with Liberman in a meeting which lasted 22 minutes during which Netanyahu called on Liberman to accept a compromise on the draft law. Liberman insists that the compromise favors the haredi parties, and said earlier on Monday that he would not “be partners in a halachic government.”

“A month and a half ago the people voted in favor of a right-wing government headed by me,” Netanyahu said in a statement Monday evening in the Knesset. “I’m making all efforts to prevent unnecessary and wasteful elections that will cost billions of shekels. There’s no reason to do so and paralyze the country for another half a year. There are excellent solutions, and if there’s a will, it (the crisis over the draft law) can be solved within two minutes.”

The Knesset on Monday evening passed in a preliminary reading a bill that would disperse the Knesset, sending the country to new national elections, tentatively set for August 27.  The vote was 65 votes in favor and 43 against. It could have its first reading as early as late Monday night or Tuesday. The final votes would be held on Wednesday evening, the last time for Netanyahu to form a government coalition.

Gantz, the leader of the opposition, said on Monday said he should be given a chance to form a government before the country goes to new elections. His party voted against the bill to dissolve the Knesset, which would prevent President Reuven Rivlin from turning to him to form a government if Netanyahu fails.