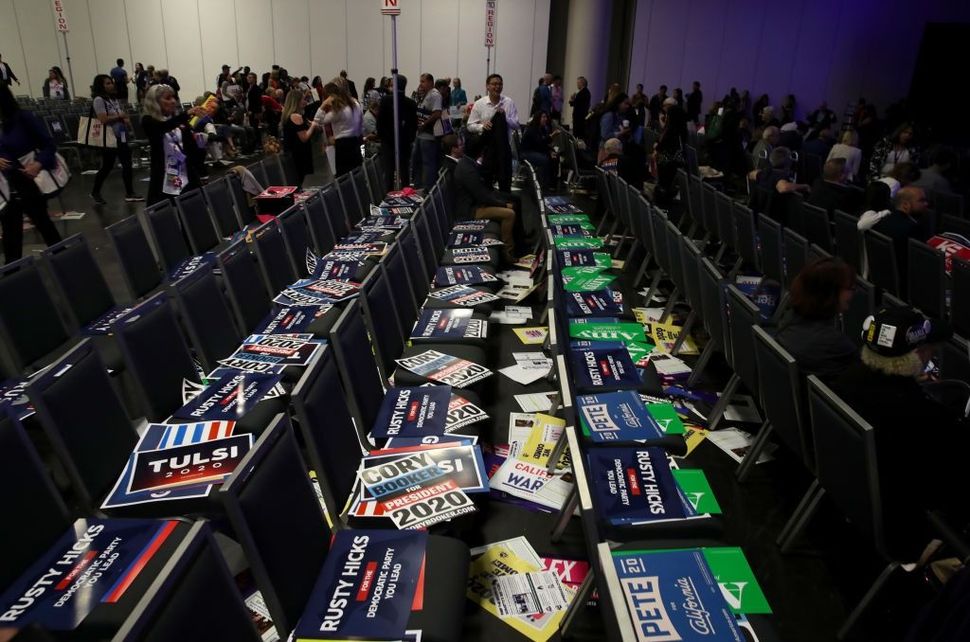 (JTA) — Draft resolutions fiercely critical of Israel that were put forth by far-left Democrats in California for the state party’s convention were substantially rewritten by the Resolutions Committee of the California Democratic Party.

Four of the rewritten resolutions were passed by the committee on Friday at the party’s state convention in San Francisco, and two were withdrawn, J. The Jewish News of Northern California reported. The original authors of the four passed resolutions withdrew their names and co-sponsorships due to the significant changes, according to the report.

One resolution, authored by David Mandel, a state Assembly delegate from the Sacramento area who reportedly holds dual U.S.-Israel citizenship, suggested that the Israeli government is partly responsible for the atmosphere inspiring last October’s massacre at a Pittsburgh synagogue.

Other resolutions urged a rollback of President Donald Trump’s Israel policies, including recognizing Israel’s sovereignty over the Golan Heights; condemn Israel for clashes with Palestinians in Gaza without mentioning provocations or attacks by the Hamas leadership there; and direct party officials to take a subsidized trip to Israel only if they spend the same amount of time visiting Palestinian villages and leaders.

Democratic Majority for Israel in a statement on Friday praised the California Democratic Party for rejecting the one-sided resolutions attacking Israel.

“Working with other organizations, our board, and individuals, we made clear to California Democratic Party leaders and delegates that these resolutions were oversimplified and inaccurate. And we are very pleased that, after careful deliberation, the party accepted our view. Sadly though, this is not the last time we’ll see efforts to demonize and delegitimize Israel.” The group’s president, Mark Mellman said.

The current California Democratic state platform, adopted in 2018, supports “a solution of the Israeli-Palestinian conflict negotiated by the parties that guarantees equality, security and democracy for all, recognizes Israel’s future as a secure and democratic Jewish state with recognized borders and provides the Palestinians with independence, sovereignty and dignity.”

It also regards Jerusalem as the capital of Israel, but says the relocation of the U.S. Embassy to Jerusalem “should not remove [Jerusalem] from final status negotiations, nor should it be used to undermine the peace process.”