Trump: Israeli Politics Are ‘Messed Up,’ I’m ‘Not Happy’ With New Elections 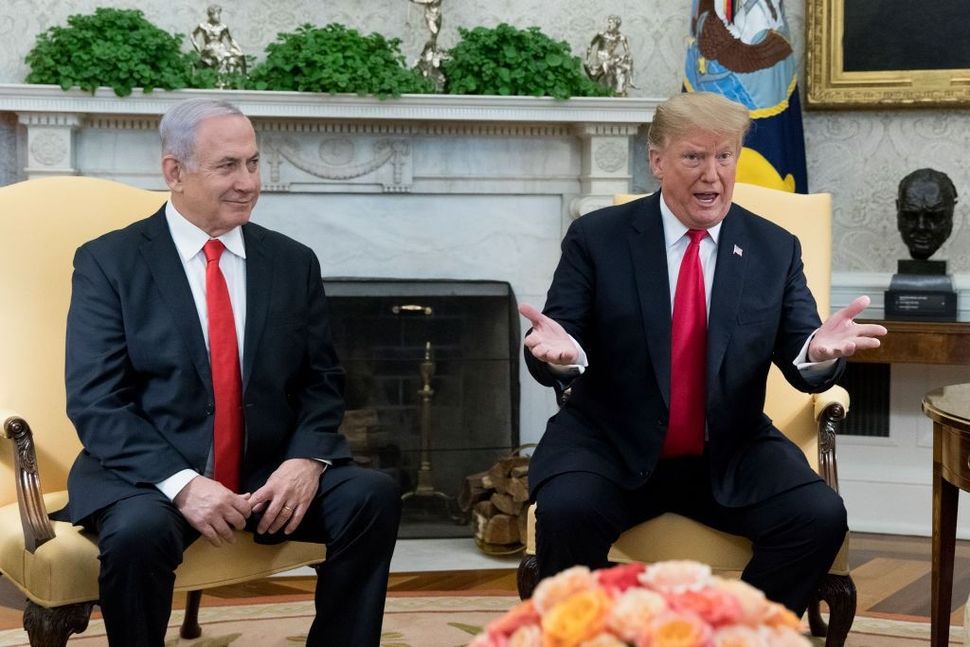 US President Donald J. Trump (R) and Prime Minister of Israel Benjamin Netanyahu (L) deliver remarks to members of the news media during their meeting in the Oval Office of the White House March 25, 2019 in Washington, DC. Image by Michael Reynolds – Pool/Getty Images

JERUSALEM (JTA) — President Donald Trump said that Israeli politics are “messed up” and that the country should “get their act together.”

He also said that his administration is “not happy” about the turn of events.

Trump made the comments on Sunday on the White House lawn before leaving for a visit to the United Kingdom.

“Israel is all messed up with their election. I mean, that came out of the blue three days ago. So that’s all messed up. They ought to get their act together,” he said.

“Bibi got elected. Now, all of a sudden, they’re going to have to go through the process again until September? That’s ridiculous. So we’re not happy about that,” he said, using Israeli Prime Minister Benjamin Netanyahu’s nickname.

He added that the new elections could harm the chances of success for his administration’s Israeli-Palestinian peace plan, which will be rolled out in increments, starting with an economic “workshop” to encourage capital investment in the West Bank, Gaza, and countries in the region, for finance ministers and global and regional business leaders, in Manama, Bahrain, on June 25 and 26.

Trump told reporters of the peace plan, however, “I think we have a good chance, but we’ll see what happens.”

Hours after the fall of Israel’s government very early Thursday morning, Trump called Netanyahu “a great guy” and said of the new elections scheduled for September 17: “That is too bad. Because they don’t need this. I mean they’ve got enough turmoil over there, it’s a tough place.”

Trump: Israeli Politics Are ‘Messed Up,’ I’m ‘Not Happy’ With New Elections