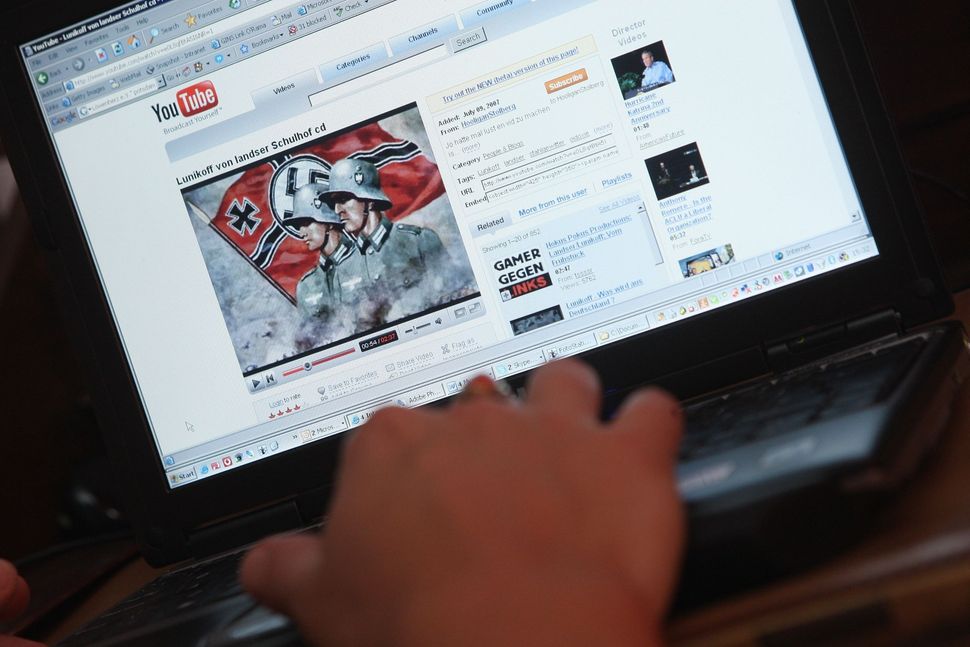 A video on YouTube from the German neo-Nazi music band Lunikoff, in 2007. Image by Getty

As YouTube cracks down on Holocaust denial on its video platform, it has deleted the account of a prominent anti-Semitism researcher, seemingly in error, the Jewish Chronicle reported.

On Wednesday, YouTube said in a press release that it would begin deleting videos from its site that “alleg[e] that a group is superior in order to justify discrimination, segregation or exclusion based on” protected categories. The statement said that that included videos that glorified the Nazis or deny “well documented events,” of which the site listed the Holocaust and the Sandy Hook shooting as examples.

But the policy change seemed to catch David Collier, an anti-Semitism researcher in the U.K., on accident.

“It’s so hurtful,” Collier wrote on Twitter. “Hours and hours of unique, irreplaceable footage gone,” he said. “Oh the antisemities are dancing today!”

Collier has gained prominence in the U.K. for researching instances of anti-Semitic statements from politicians in the country’s left-wing Labour party.

It’s like a virus. YouTube have now banned my YT channel for ‘hate-speech’ – probably because as a fighter against #antisemitism– I share examples of it. It’s so hurtful. hours & hours of unique – irreplaceable footage gone. Oh the antisemites are dancing today! @TeamYouTube