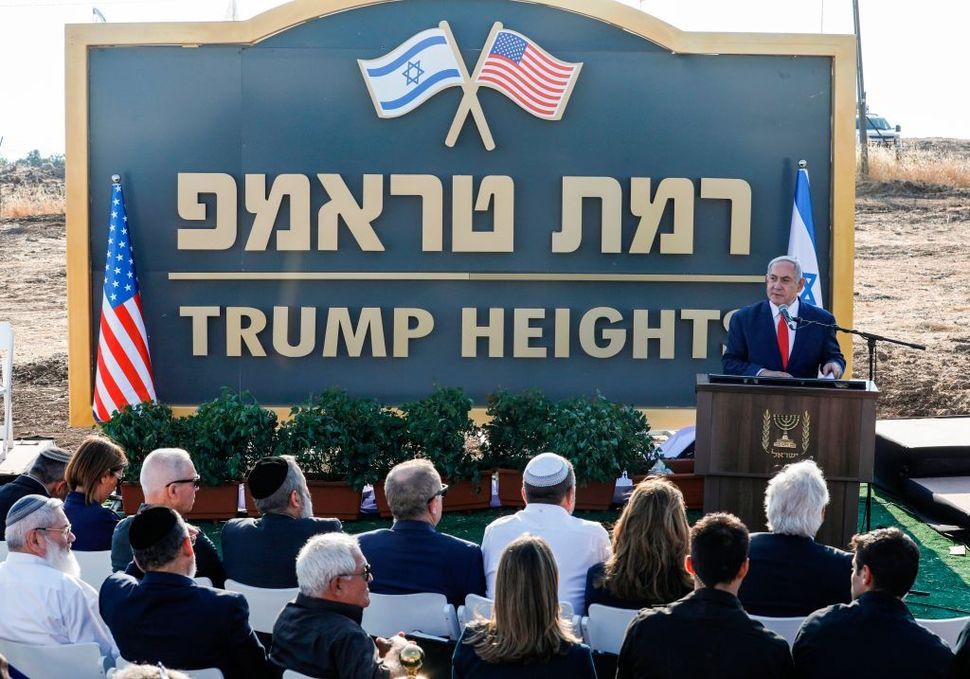 Israeli Prime Minister Benjamin Netanyahu gives a speech before the newly-unveiled sign for the new settlement of “Ramat Trump”, or “Trump Heights” in English, named after the incumbent US President during an official ceremony in the Golan Heights on June 16, 2019. Image by JALAA MAREY/AFP/Getty Images

A sign was unveiled on Sunday, during the weekly Cabinet meeting held in the Golan Heights at the site of the new community. The sign says Ramat Trump in Hebrew and Trump Heights in English under graphics of an Israeli flag and a United States flag and surrounded by a gold border. A cornerstone laying ceremony also was held.

The name is listed in a bill to establish the community that has been submitted for approval. Since the current government is interim after the dissolution last month of the Knesset and call for new elections, it cannot officially approve the project, which will have to wait for the next government.

The U.S. ambassador to Israel, David Friedman, noted that the last time Israel named a community for a sitting president was Kfar Truman in central Israel in 1949. He also pointed out that Trump’s birthday had been on Friday and called the new community a fitting birthday present.

Prime Minister Benjamin Netanyahu announced in late April that he would form the new community in honor of Trump in the Golan, a month after the U.S. president signed a proclamation recognizing Israel’s sovereignty over the strategic heights, which Israel captured from Syria during the Six-Day War in 1967 and annexed in 1981. The United States is the first country to recognize the Golan as part of Israel.

The community in the northern Golan Heights is on the site of a neighborhood that was approved but never built in 1992. The never-established neighborhood of Bruchim is zoned for 110 living units. It is adjacent to the existing community of Kela Alon, and will be part of the municipal government of the Golan Regional Council.

There are currently 33 towns and villages in the Golan, but no new communities have been established since 1999, the Jerusalem Post reported. Twenty-nine of the communities were established by Labor governments from 1967 to 1977.