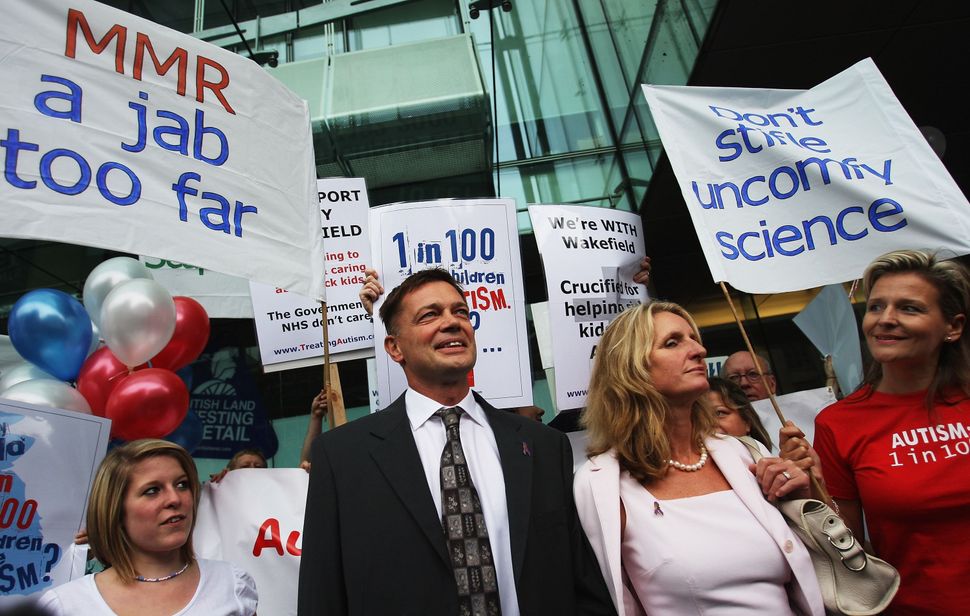 Two major Jewish philanthropists are funneling millions of dollars to prominent anti-vaccine organizations and their controversial leaders, some of the most prominent figures in the anti-vaccine movement, the Washington Post reported.

Bernard and Lisa Selz run a family foundation that has donated nearly $28 million to various causes over the last several years. Bernard Selz manages a hedge fund with a portfolio valued at over half a billion dollars, the Post reported.

Bernard Selz was a director of the Center for Jewish History until April 2015, according to the Center’s 2015 tax filings. The Selz foundation has donating tens of thousands of dollars to the Center over the years. They have also donated large amounts to colleges and universities and causes varying from civil liberties, to ending the war on drugs, to the arts. In 2016, Manhattan’s Frick Collection museum announced that Selz would become a director of the museum.

In 2016, the Selz’s foundation gave $848,000 to two organizations run by Andrew Wakefield, who is considered the father of the modern anti-vaccine movement. Wakefield, who was a gastroenterologist in the U.K., was stripped of his medical license there after he was found to have committed fraud in publishing an article that claimed to show a causative effect between receiving the measles-mumps-rubella vaccines and autism diagnosis. The Selz foundation has donated over $1.6 million over several years to Wakefield’s groups.

The Selz’s foundation has also given hundreds of thousands of dollars in recent years to various other anti-vaccine groups. They are among the first 16 donors listed as funders of the anti-vaccine film “Vaxxed,” which presents several stories of parents claiming that their children developed autism after receiving the MMR vaccine.

There is no scientific link between vaccines and any chronic condition. A study published this year that tracked 657,461 Danish children over 11 years found no correlation between who received the vaccine and who developed autism.

Lisa Selz serves as president of the Informed Consent Action Network, or ICAN, a prominent anti-vaccine group run by Del Bigtree. The Selz’s donations have helped ICAN become the best-funded anti-vaccine group. Bigtree has spoken at two recent anti-vaccine symposiums organized for the ultra-Orthodox Jewish community, one in Monsey, New York, and one in Brooklyn on June 4.

“They should be allowed to have the measles if they want the measles,” Bigtree said outside the Brooklyn meeting. “It’s crazy that there’s this level of intensity around a trivial childhood illness.”