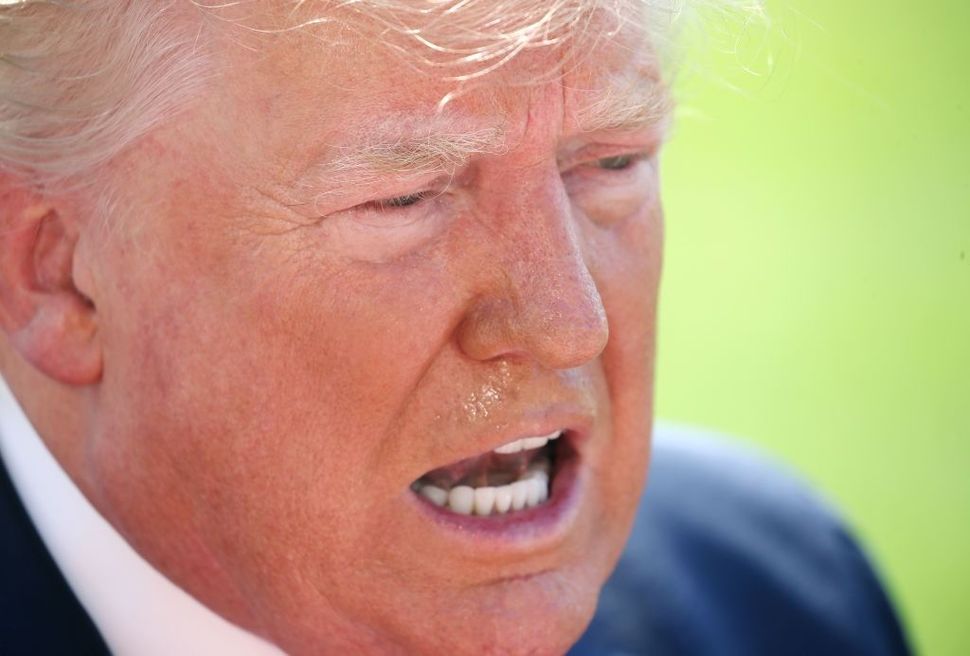 President Donald Trump speaks about the resignation of Labor Secretary Alex Acosta while talking to the media at the White House on July 12, 2019. Image by Mark Wilson/Getty Images

WASHINGTON (JTA) — The Orthodox Rabbinical Council of America said it “condemns the most recent outburst of racist rhetoric in the highest levels of government,” an apparent reference to President Trump’s call on four Democratic congresswomen to “go back” to unspecified countries.

The statement Thursday also alluded to statements by two of the congresswoman Trump has named, Rashida Tlaib of Michigan and Ilhan Omar of Minnesota, that have insinuated dual loyalties by advocates for Israel. Omar has apologized for some, but not all, of her controversial statements.

The other two targets of Trump’s ire are Reps. Alexandria Ocasio-Cortez of New York and Ayanna Pressley of Massachusetts.

“Whether statements that question the loyalty of American Jews when the safety and security of Israel is at stake or rallies that call upon descendants of immigrants to return to countries they never knew, we see these pronouncements as dangerous to the core values of our faith and the foundations of American society,” the statement said.

The statement’s tough tone was unusual for a body representing a segment of the community that has embraced Trump for aligning his policies with those of the Israeli government led by Benjamin Netanyahu, particularly in moving the U.S. embassy to Jerusalem. Centrist and leftist Jewish groups have also slammed Trump for his attacks on the congresswomen.

“The lack of civil discourse, the racist and xenophobic chants at political rallies, and rise of fringe hate groups all demand that we take a stand for goodness and respect,” RCA Vice President Rabbi Binyamin Blau said in the statement.

Trump in a tweet this week said the four congresswomen should “go back and help fix the totally broken and crime-infested places from which they came.” Omar was born in Somalia; the other four are born in the United States, and what “places” Trump was referring to is not clear.

At a rally Wednesday night in North Carolina, Trump supporters chanted “send her back” repeatedly when Trump attacked Omar.