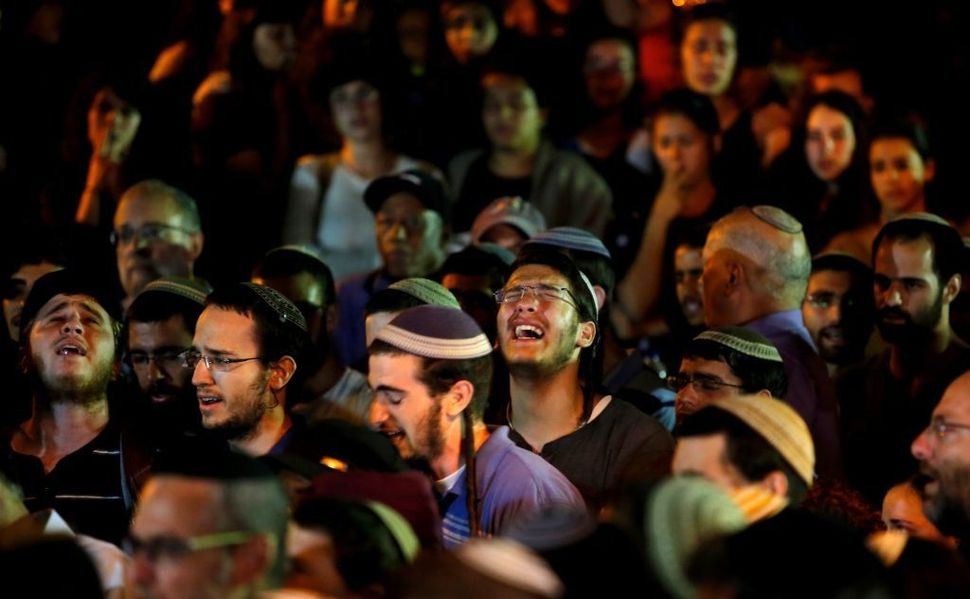 Relatives and friends mourn during the funeral of 19-year-old Israeli soldier Dvir Sorek at a cemetery in the West Bank settlement of Ofra, August 8, 2019. Image by GIL COHEN-MAGEN/AFP/Getty Images

Dvir Sorek of the Ofra settlement was reported missing on Wednesday evening, hours after he had said he was returning from a shopping trip to Jerusalem. His body was found at about 3 a.m. Thursday on a road leading to the Migdal Oz settlement where he attended the Machanaim yeshiva.

It is believed that he was killed in a different location and his body moved. His cellphone had been found earlier near a different Etzion bloc settlement, according to reports.

The teen was part of the Hesder program, which combines yeshiva studies and army service. His family has been notified, the Israel Defense Forces said in a statement.

The Israel Defense Forces is treating the murder as a terrorist attack.

No Palestinian groups have claimed responsibility, but Hamas praised the attack as “A powerful response to the idea of annexation of the occupied West Bank,” Ynet reported.

Sorek’s body was found near the spot where three Israeli teens were kidnapped and murdered in June 2014.

“Security forces are in pursuit of the lowly terrorist with the purpose of catching him and bringing him to justice,” Israeli Prime Minister Benjamin Netanyahu said in a statement.

Sorek was the son of Yoav Sorek, the editor of the Shiloach Journal of the Tikvah Fund, and the grandson of Rabbi Binyamin Herling, who was killed in a terror attack in October 2000.

“We are heartbroken over the murder last night of Dvir. He was a student beloved by his friends and respected by his teachers,” said Rabbi Kenneth Brander, president and rosh yeshiva of Ohr Torah Stone, which includes the Machanaim yeshiva in its network. “The loss of this sweet soul and gentle spirit will not deter us from continuing to build the State of Israel through the prism of a love for Israel and love of all humanity.”