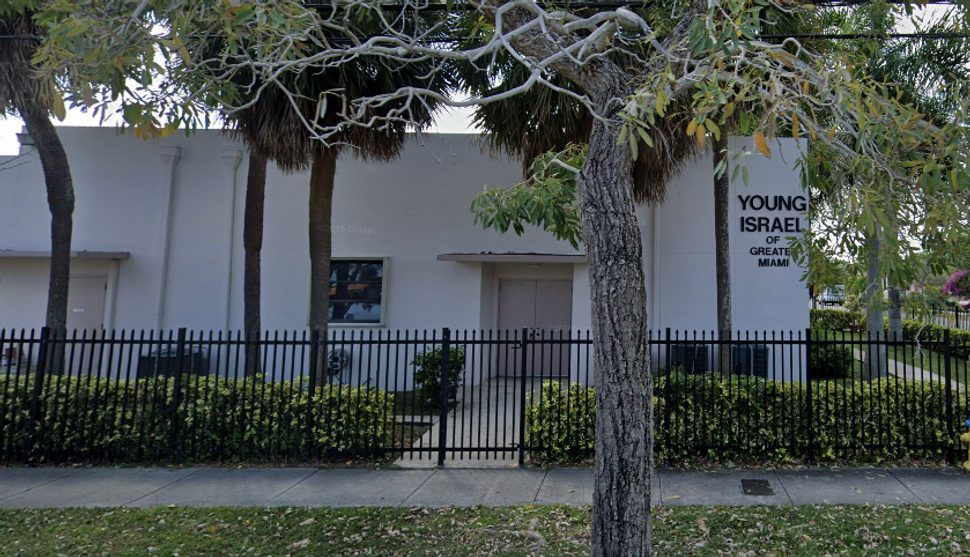 Young Israel of Greater Miami, where a Jewish man was shot in a drive-by. Image by Google Maps

(JTA) — Police have arrested a suspect in the shooting of an elderly man outside a synagogue in Miami, Florida.

Miami-Dade Police took Carlints St. Louis, 30, into custody a day after he filled out a report with a nearby police department claiming that a firearm had been stolen from his black Chevy Impala — the car police were seeking in the synagogue shooting — the Miami Herald reported.

Bullets from a loaded magazine in the car matched bullet casings from the attack, according to the newspaper.

Police did not identify a motive or say if the charges against St. Louis will include a hate crime.

The victim in the July 28 attack, Yosef Lifshutz, 68, was shot six times in the leg as he stood outside the Young Israel of Greater Miami  waiting for daily prayers to begin. Lifshutz, also known as Warren, required surgery and is still recovering.

St. Louis was charged Tuesday with attempted felony murder, discharging a weapon from a car and aggravated battery on a person over 65.

He had filed his report about the stolen firearms on Monday with the Hallandale Beach Police Department.

“Acts of violence will not be tolerated in our community, particularly in sacred places of worship,” she said in a statement Wednesday, adding that she will “vigorously prosecute” the case.”