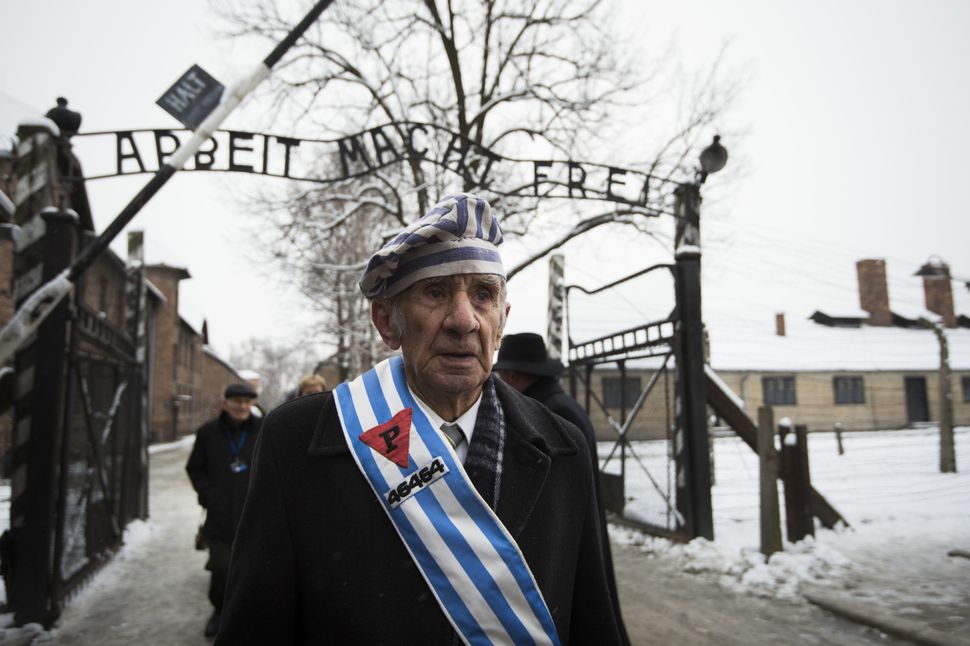 Auschwitz survivor Miroslaw Celka walks out the gate with the sign saying “Work makes you free” after paying tribute to fallen comrades at the “death wall” execution spot in the former Auschwitz concentration camp in Oswiecim, Poland, on the 70th anniversary of the liberation of the Nazi death camp on January 27, 2015. Image by Getty

(JTA) — A U.S. Army commander of a recruiting company in Houston was suspended after he distributed a memo in which he used the phrase “Arbeit Macht Frie.”

The phrase, which means “Work Will Set You Free,” was displayed on the gate of the Nazi death camp Auschwitz.

The commander, whose name and unit have not been released, used the phrase to headline a section of the memo that explains incentives, including time off, available to recruiters depending on the number of contracts that they are able to complete, the U.S. military newspaper the Stars and Stripes reported Friday.

The memo first came to light in a tweet from “Truth of Army Recruiting.” The post includes a photo of the infamous Auschwitz entrance gate, though the memo, which was distributed electronically, reportedly did not include such a photo.

The commander’s use of the term is under investigation, Stars and Stripes reported, citing Kelli Bland, spokeswoman for Army Recruiting Command, based at Fort Knox, Ky.

The commander was suspended until the end of the investigation and has apologized to his unit.

“Army recruiting leaders will take appropriate action once the investigation is complete and all facts are known,” Bland told the newspaper. “When an individual enters into the military, they are held to high moral and ethical standards — soldiers who choose not to live up to our values will be held accountable for their actions.”