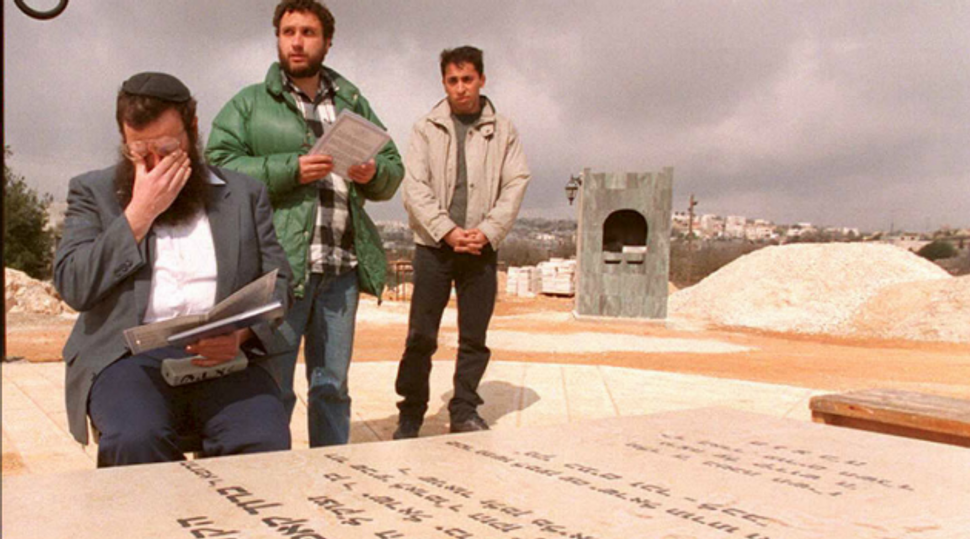 Right-wing activist Baruch Marzel wipes his eyes at the grave of Baruch Goldstein, who killed 29 Palestinians in Hebron. Image by Getty Images

The court ruled late Sunday evening that Baruch Marzel and Bentzi Gopstein can not run Knesset in the September 17 elections over statements they have made against Arabs that are considered incitement to racism.

Earlier this month the Central Elections Committee had decided that the two men could run. The appeal to Israel’s Supreme Court was filed by filed by the Israel Religious Action Center of Israel’s Reform Movement and the Blue and White, Democratic Union and Labor parties.

The court decided that the party, led by attorney Itamar Ben Gvir, minus the two barred men, could stand in the elections, however. The Otzma Yehudit party is the spiritual godchild of Rabbi Meir Kahane’s Kach party, which was banned from the Knesset under a Basic Law outlawing incitement to violence and later exiled entirely in Israel. Like its Kahanist ancestors, the party calls for a greater Israel from the Jordan River to the Mediterranean Sea, as well as the annexation of the West Bank. It calls for unrestrained settlement building and the resettlement of Palestinians and Arab Israelis in Arab countries. It wants to restore Israeli sovereignty to the Temple Mount and cancel the Oslo Accords.

Prior to the April elections, the Supreme Court disqualified Otzma Yehudit Michael Ben-Ari from running due to racist statements against Arabs.

Marzel was second on the party’s list and Gopstein was fifth. Polls have shown that Otzma Yehudit will not win enough votes to enter the Knesset by crossing the 3.25 percent electoral threshold.