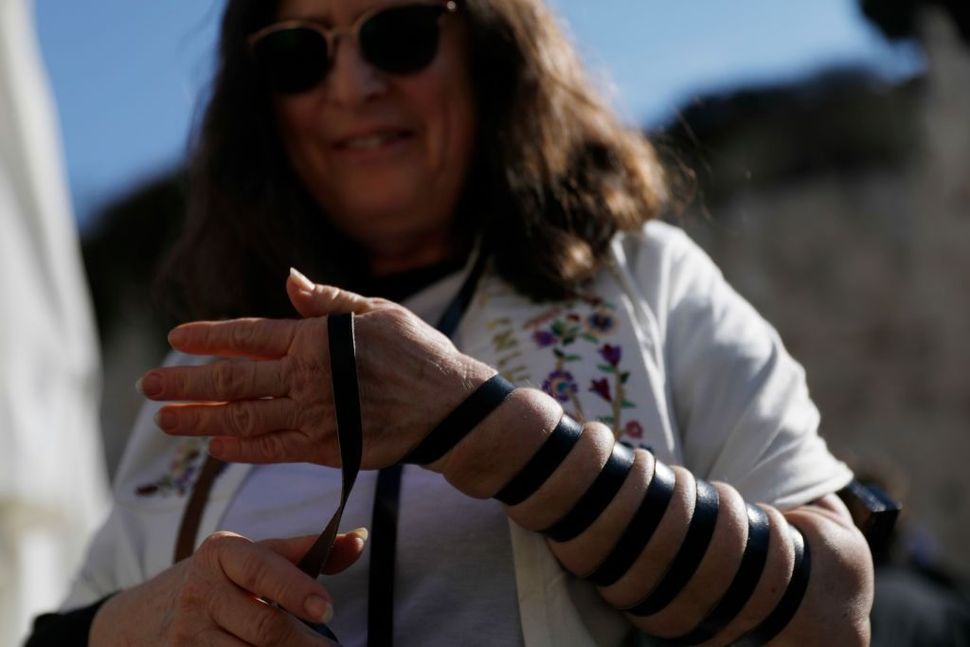 A member of the liberal Jewish religious movement “Women of the Wall” adjusts her tefillin during a prayer event marking the organization’s 30th anniversary at the egalitarian prayer section of the Western Wall, March 8, 2019. Image by GALI TIBBON/AFP/Getty Images

JERUSALEM (JTA) — A Likud lawmaker close to Prime Minister Benjamin Netanyahu has offered to prevent egalitarian prayer at the Western Wall in exchange for a small ultranationalist faction dropping out ahead of this month’s Knesset election.

The move would anger non-Orthodox Jews in Israel and the Diaspora, for whom the right to pray at the wall as they see fit is a major bone of contention with Israel.

According to Israeli news site Ynet, MK Miki Zohar made the promise during talks with the Noam Party, a small religious Zionist faction primarily known in Israel for its unwavering opposition to gay rights. The party has not been doing well in the polls and is expected to fall well below the electoral threshold necessary to enter the Knesset. Netanyahu and the Likud have been pushing members of the national camp not to support smaller parties in order not to “waste” votes.

According to the report, Zohar also offered to enact more stringent conversion policies. While Zohar told the Israeli news outlet that Netanyahu had approved of his outreach, a Likud spokesperson said that “there will be no change in conversion laws, and nobody will cancel the egalitarian prayer area at the Western Wall.”

In 2017, the government pulled out of a 2016 agreement to expand the holy site’s southern section, used for egalitarian prayer, and appoint an interdenominational commission to oversee it. The compromise was a result of three years of negotiations among the Jewish Agency for Israel, non-Orthodox leaders, the Israeli government and the Western Wall’s haredi Orthodox management.

A majority of Israeli Jews support changes to the religious status quo that gives Orthodox authorities a monopoly on Jewish religious practice in Israel.