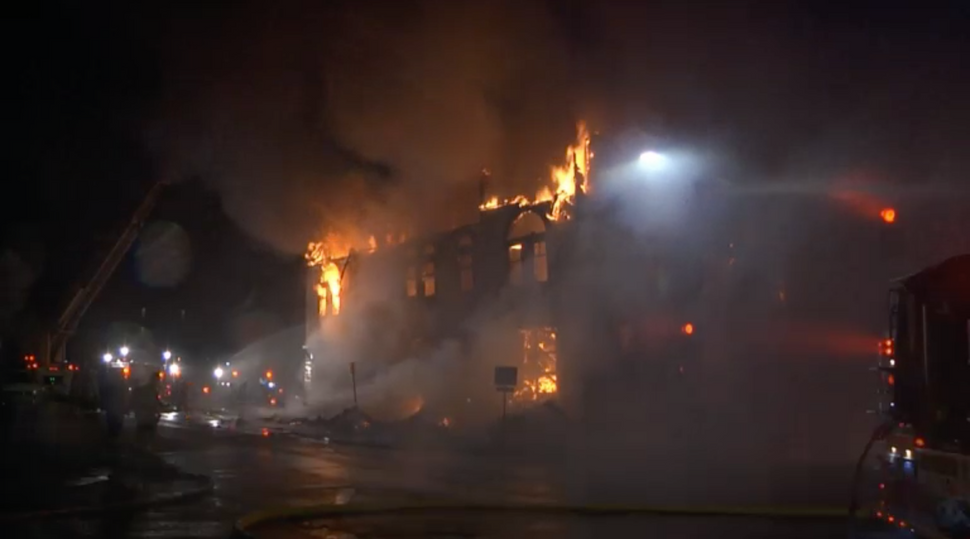 A man experiencing homelessness pleaded guilty on Tuesday to starting a fire that burned down a synagogue in Minnesota earlier this month, the Duluth News Tribune reported.

Matthew Amiot said he was seeking shelter from the cold in a sukkah, a temporary dwelling built behind the Adas Israel Congregation in Duluth. He had tried to light a fire for warmth by burning some of his clothes, but the fire quickly grew out of control, he said. He added that he had tried to put out the fire by spitting on it, and when that didn’t work, he left the scene to go find help. Firefighters, who had been called by neighbors, arrived at the synagogue within minutes but were unable to save the 118-year-old building.

“I lit a little fire and woke up and it was a lot bigger,” Amiot testified in court.

A firefighter suffered a concussion from falling debris while attempting to quell the blaze. Some of the synagogue’s Torahs were able to be rescued, but the building itself was a total loss. The damage to the structure and other ritual objects inside was estimated at more than $367,000.

Amiot’s next hearing wasn’t scheduled until October 8, but his attorney, Keith Shaw, contacted the court on Monday in order to set up the plea. Defendants do not usually plead guilty without first striking a deal with prosecutors, the News Tribune noted.

But Amiot said that he wanted to resolve the matter because he had been on a waiting list for housing assistance for three years, and had finally obtained a meeting for Wednesday afternoon, which he would not have been able to attend had he remained in custody. Assistant county attorney Vicky Wanta agreed to give Amiot a supervised release to attend the meeting. He will be required to stay in a local homeless shelter every night while he awaits sentencing on October 25.

Amiot has received nine convictions in recent years for minor offenses like theft and trespassing, which both Shaw and Wanta said were a result of his homelessness.