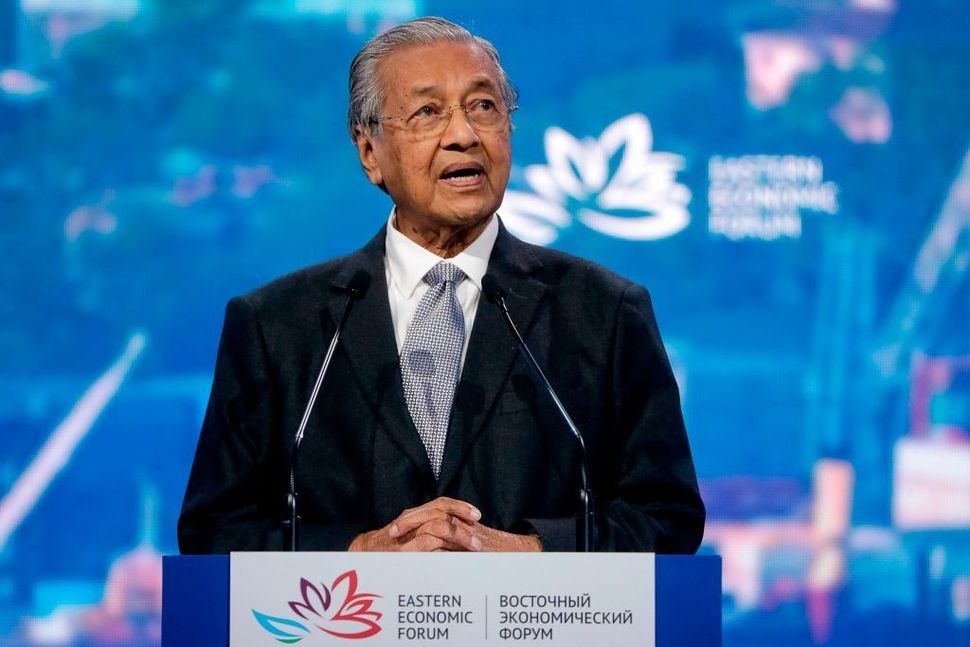 NEW YORK (JTA) — The prime minister of Malaysia defended his past anti-Semitic statements and questioned the number of Jews killed during the Holocaust in a speech at Columbia University.

“I am exercising my right to free speech. Why is it that I can’t say something against the Jews, when a lot of people say nasty things about me, about Malaysia, and I didn’t protest, I didn’t demonstrate?” Mahathir Mohamad said Wednesday in response to a question from an audience member.

Mohamad, who was speaking at the college’s World Leaders Forum, has called Jews “hook-nosed,” said they “rule the world by proxy” and questioned the number of Jews killed in the Holocaust. He also has said that he is “glad to be labeled anti-Semitic.”

The 94-year-old leader returned last year as prime minister of the southeast Asian country after serving from 1981 to 2003.

In response to a question by a student who identified herself as a member of a campus pro-Israel group, Mohamad denied questioning how many Jews were killed in the Holocaust, but then went on to do so.

“Well, I have not disputed them, but I have said that ‘Who determined these numbers?’ If it is somebody who is in favor, you get one figure, if somebody who is against, you get another figure,” he said.

“So I accept that there was a Holocaust, that there were many Jews killed, and in fact at one time I was very sympathetic towards them during the war, when you were not around, but I was around at that time.”

At that point, the questioner interrupted him, saying her grandmother had been in the Holocaust. Mohamad declined to speak further about the topic.

Mohamad did express sympathy for other targeted minority groups, condemning Burma for its persecution of Rohingya Muslims and saying that the world failed to take action during the Cambodian genocide as more than 1 million people were killed.

The prime minister spoke for about 25 minutes about multilateralism and relations between Malaysia and its neighbors with moderator Lien-Hang Nguyen, an associate history professor at the university. Nguyen did not bring up Mohamad’s anti-Semitic statements.

But Vishakha Desai, a senior adviser to the Columbia president, Lee Bollinger, did bring them up in his introduction of the Malaysian leader. She also noted Malaysia’s decision earlier this year to ban Israeli athletes from participating in the 2019 World Para Swimming Championships. The International Paralympic Committee responded by stripping Malaysia of the right to host the event.

“Clearly such attitudes are absolutely contrary to what we stand for,” Desai said.

Desai also referenced a letter by Bollinger in which he defended Mohamad’s appearance on campus while also calling the leader’s remarks “abhorrent” and saying he was committed to ensuring the “safety and well-being” of Jewish students. Columbia had drawn criticism from the campus Hillel, pro-Israel groups and the Anti-Defamation League for inviting Mohamad.